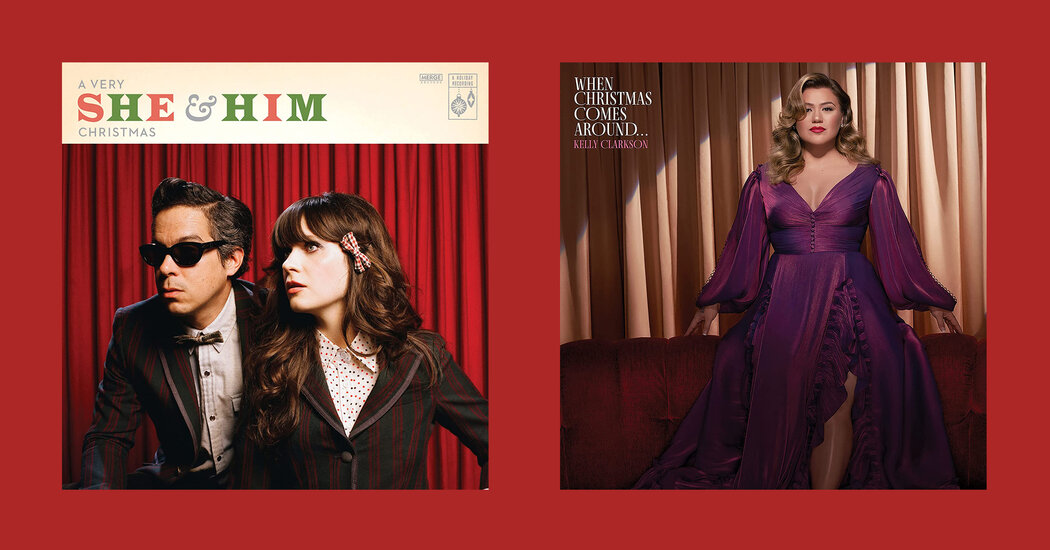 Journey alumnus Steve Perry must be proud of his high marks. On “The Season”, he pushes a familiar repertoire – “Winter Wonderland”, “Auld Lang Syne” – up to slow tempos and up to the scale where his tenor borders on falsetto. The arrangements take a vintage approach from the 1950s, a piano with jazz accents with a background of strings. But Perry’s voice doesn’t rise as smoothly as it did in the days of “Don’t Stop Believin”. It hits grainy, shaky areas so often that songs designed for reassurance are rather tense and filled with tension: will it get through the take? PARÃ‰LES

Pistol Annies – the alliance of composition and vocal harmony of Miranda Lambert, Ashley Monroe and Angaleena Presley – wrote 10 new songs for “Hell of a Holiday”, dipping into retro styles like Western Swing, girl group rock and Laurel Canyon pop-folk. Their storylines encompass holiday cheer, faith, and flirting (â€œCome on Christmas,â€ who admits to having â€œa crush on Santa Clausâ€). But they also recognize that vacations can be a strain. Among the handful of covers is Merle Haggard’s “If We Make It Through December”, a stoic 1973 song about a laid-off factory worker, while Pistol Annies also wrote about seasonal depression (“Make You Blue”) and family conflicts. On the southern rock of “Harlan County Coal”, a woman struggles to spend Christmas with a drunk husband and “47 dollars in the bank of gold.” Â»PARÃ‰LES

Joe Robinson, ‘Christmas at the Chalet’

Joe Robinson, an Australian guitarist, delivers an assortment of familiar Christmas songs – including “Silent Night”, “Let It Snow” and “Happy Xmas (War Is Over)” – with erased virtuosity on “Christmas at the Chalet”. His versions are real-time acoustic guitar solos, filled with so much elastic counterpoint that it’s sometimes hard to believe he’s playing alone. PARÃ‰LES

She & Him ‘A very good Christmas for him and her: 10th anniversary of the luxury edition’

As She & Him, actress / singer Zooey Deschanel and sepia-toned singer-songwriter Mr. Ward have always wanted to sound like they’re from another time. Now they can: She & Him’s holiday album is 10 years old, and that’s apparently reason enough for Merge Records to re-release “A Very She & Him Christmas” in a new set of themed packaging. return. The 10th Anniversary Edition vinyl features a bonus seven inch single with new covers of “This Christmas” by Wham! and Madonna’s “Holiday”. “Holiday” is a highlight: Deschanel and Ward add a bit of synth, pick up the tempo and relax a bit on the carefully cultivated aesthetic. RUSSONELLO

Nashville-based singer-songwriter Amanda Shires rewrote “Silent Night” as a downhearted and minor funeral song – “Nothing Is Calm / Nothing Was Right” – on her album “For Christmas,” which includes nine other songs. They often revolve around vacation romance, whether it’s going well (“Blame It on the Mistletoe”) or not so well (“Home to Me”). With his singing, quivering voice and a piano-centric band, Shires works primarily for high-pitched drama. But she also allows for some comedy, like in her merry shuffle, “Gone for Christmas”: a wishlist capped with “I want you to go for Christmas”. PARÃ‰LES

â€œChecked the fireplace and your bottom is missing,â€ sings R&B star Bryson Tiller on â€œBe Mine This Christmas,â€ a sultry, tight, slightly sultry and regretful hymn. On â€œA Different Christmasâ€, Tiller’s first holiday outing, his voice is heavily worked and the production is contemporary and varied, all in the service of a range of holiday moods: a tender duet with his daughter on â€œ Winter Wonderland â€; the lively Atlanta bass energy on “Ain’t a Lonely Christmas Song”; and on â€œLonely Christmas,â€ about a vacation after the breakup, her guest Justin Bieber fondly remembering how â€œwe used to get our lights from Walmartâ€. CARAMANIC

Music Jubin Nautiyal on music and his love for Kolkata