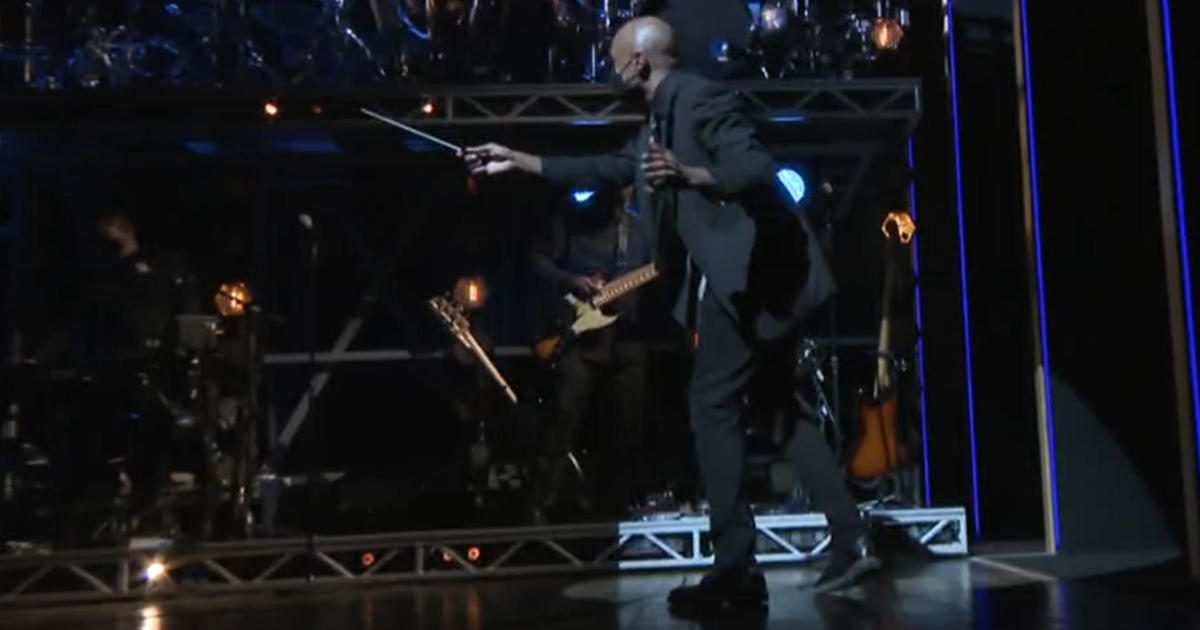 Broadway and beyond: Conductors Jason Michael Webb and Alvin Hough Jr. aim to help other musicians of color break down barriers

NEW YORK — There have recently been renewed efforts to have more inclusive orchestras on Broadway.

CBS2’s Dana Tyler went behind the scenes at two Broadway shows where conductors talked about how they help other musicians break down barriers.

“MJ the Musical” at the Neil Simon Theater features the iconic songs of Michael Jackson. Jason Michael Webb is the show’s musical director, leading the orchestra on and off stage.

“I’ve been obsessed for 20 years. I’ve wanted this gig for 20 years, and they finally gave it to me,” he said.

At the Lunt-Fontanne Theatre, the music keeps the audience on their feet at “Tina: The Tina Turner Musical”.

In 2022, the number of African Americans leading on Broadway can be counted on one hand.

“It’s an honor to be, to be the musical director for such a great show,” Hough said.

Tyler spoke with Hough in his dressing room before a recent matinee performance.

“Being here, having that kind of weight on my shoulders, it’s a weight that I love, that I graciously accept. I don’t take that for granted. … doing a show about such an iconic woman who, whose I grew up with the songs,” Hough said.

Raised in Washington, DC, Hough began playing the piano at age 5. He had a classical education, and in addition to Bach and Beethoven there was the church. He is grateful to the piano teacher who saw something in him from an early age.

“I think having a black teacher taught me Chopin…I didn’t realize how amazing it was when I was 8, 10, 12, 15. And she put me in places where I could see people who looked like me — in my church. But then when I went to that theater, I was the only one,” Hough said.

“A younger, African-American man, was that harder?” Tyler asked.

“I would be lying if I said no. It’s something that, it’s a phrase I heard a lot growing up, that you have to work twice as hard to get half of it. And I find that, unfortunately , it’s true,” Hough said.

Hough went on to say, “When I come out to bow at the end of the show, I want people to know who was running the show and say, for any little boy or little girl to say, hey, you can do whatever you want, including this.”

Hough is a founding member of Musicians United for Social Equity, or MUSE. The organization came together in 2020 during the summer of racial justice protests.

“We’re trying to give historically marginalized people of color the opportunity to be seen, to be heard, just to fit into that inner circle, which is very narrow and very closed,” Hough said.

In 1945, Everett Lee became the first black man to conduct a white orchestra on Broadway. “On the Town” was a breakthrough. The Wheeling, West Virginia native is in that state’s Hall of Fame. Lee died on January 12 in Sweden at the age of 105.

“Obviously, if there was no Everett Lee, there is no Alvin Hough,” Hough said. “Every day, every week, every month that this show goes on reminds me that, you know, I’m not the first and through MUSE, we hope I’m definitely not the last.”

Nicole DeMaio is a MUSE mentee. She plays five wind instruments and recently booked a gig through her MUSE mentor, Gregory Riley. DeMaio was a stand-in musician on the off-Broadway show “Kimberly Akimbo.”

“We had talked, we were meeting again and he said, ‘Would you be interested in filling in for this show? And of course, I said yes. So I got a copy of the music book from him. And I went from there. It was an amazing and invaluable opportunity to get a mentor to just say, not just I’m going to teach you some things, but I’m actually going to help you break into this industry,” DeMaio said. .

Backstage at “Tina,” Hough showed CBS2 where he leads the show, on a second-tier platform next to several of the 11 musicians. There are cameras and monitors so the band and actors on stage can see it.

“A lot of steering is done with, with the head. It’s a lot of sudden movements,” he said.

At “MJ,” Jason Michael Webb serves as musical director as well as co-orchestrator and arranger, and he is another founding member of MUSE.

“For me, I wouldn’t have a career at all, I think, if it wasn’t for the people looking after me. And as I evolved and evolved into, you know, manager musical on Broadway, I want to be able to give that back and help someone like I was helped,” Webb said.

“What is it, when I look over there, how is it here? During the show?” Tyler asked.

“Being here and seeing the joy that happens in the audience is actually what fuels me the most… seeing people in the audience having the same experience as me is truly a blessing,” Webb said.

Webb began acting as a child in Neptune, New Jersey. He was only 4 years old when he started studying classical piano.

“I played a solo when I graduated from high school. I was really encouraged by the people there,” he said.

Webb has appeared in seven Broadway shows so far, and in 2019 he received a special Tony Award for his music in the play “Choir Boy”.

Webb says the church has made the transition to Broadway much easier.

“What we’re doing here is, I think, providing an experience for the audience to take this wonderful journey that we’ve created. And with the church, it’s a very similar thing, … And, you know, we have the church eight shows a week,” Webb said.

“‘Man in the Mirror’ is one of my favorites and always gets to me. ‘I’ll Be There’,” Webb said.

“Yeah. Yeah,” Webb said. “After every time we do that, I’m so embarrassed by this camera because, like, there’s two tears that come right here at the end of this song, on every show, and I’m like, I can ‘I don’t cry in front of this group again. I can’t do it again.

Conducting best-selling hits from Michael Jackson and Tina Turner, Tyler asked the two musical directors what it was like to end their shows with songs filled with joy and nostalgia.

“‘Jam’, ‘Black or White’, these are songs that give off energy,” Webb said. “I want to go through the roof every time we make this final, I really, really do it because I know people are having a good time.”

“Fantastic again. And then you walked out during all that applause, how’s that for you?” Tyler asked Hough.

“It’s just a thrill to see the audience. They’ve been through three hours of a rollercoaster ride of emotions, but like you said, the last 10 minutes, huge concert, huge concert, on your feet, singing as you please, ‘ said Hough.

Dana Tyler presents CBS2 News at 6 p.m. She joined WCBS-TV in 1990 as a co-anchor and weekend reporter.

Watch now: Ukraine is on the minds of these musicians | Local News

The New York trial that has it all: Hollywood, megayachts, giant sums of money | new York