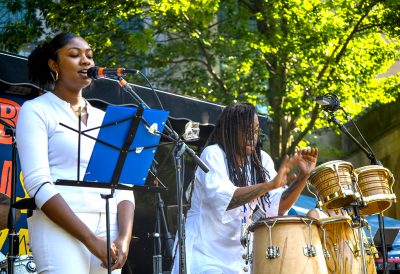 The music festivals that seemed like a distant memory a few months ago have finally become a reality for the Boston University community. Last Saturday, the BU Global Music Festival made a comeback to welcome the resurgence of more normal outdoor social events.

The festival, free to the BU and the public and produced by the BU Arts Initiative, transformed Marsh Plaza and the BU Beach to celebrate a global experience last Saturday.

“BU, part of our brand identity is that we are a global institution,” Furman said. “Part of Boston’s identity is that it is a majority minority city. [and] has huge immigrant communities… first and second generation.

This is the “niche” that Furman thought the festival could speak to when he started in 2018. He approached ethnomusicology professor Marié Abe, who is the artistic director of the festival, to create an affordable educational festival for young people. students.

The festival was in part inspired by the lunchtime world music concerts Abe scheduled years ago: Furman said the lunchtime concerts gave BU a “good track record” with a global musical representation, and they wanted to continue on this trend.

Addressing the lack of international musical representation in Boston and presenting it in a way that appeals to students sparked the genesis of the festival.

“There is still not a lot of global world music programming in the city and some of it can be quite expensive,” Furman said. “I felt that, for lack of a better term, the universe was saying that this is something that you can all do and that it will fill a niche, it is an interesting thing to bring the students and the community together. “

To achieve its goal this year, the Arts Initiative presented a diverse musical program. Some of the headliners included: Combo Chimbita from Colombia and New York, Riyaaz Qawwali from Pakistan and Texas, and Eastern Medicine Singers from Algonquin and Rhode Island.

“This year, all the artists are based in the [United States], but they still come from cultural communities, rich in heritage and art, ”said Furman. “We just have amazing programming.”

Festival administrators have prioritized a selection of minority groups, such as artists and groups identified by women, to feature in this year’s event to counter male dominance in the global music industry. For example, Veronica Robles Mariachi Quartet is an all-girl group based in Boston who brought authentic Mexican sound and flair.

“I had never seen an all-female Mariachi band before, and the music was really catchy and fun,” said Keeghan Bauer, a sophomore student at the College of Communication who attended the festival. “It’s so important for women to have the opportunity to show off their talents, especially in an industry where men are dominant.

Another group that performed was Boston-based Gund Kwok, an Asian female lion and dragon dance troupe that performed on stage on BU Beach. The children’s troupe performed in lion costumes and a drum and cymbals played throughout the dance.

Events ran from 12:00 p.m. to 9:00 p.m., and the program also included workshops and an international quirk to accompany the international serenade. The evening ended with La Pelanga, a Californian DJ collective with Colombian, Indonesian and Dutch influences.

The only main stage on BU Beach allowed patrons to sit on the grass and watch shows. There were also kiosks dotted around the perimeter of the beach. At Marsh Chapel Plaza, international organizations have come together to represent their respective cultures.

The outdoor location was not the original plan, however. The festival took place inside the George Sherman Union in 2019 and the Tsai Performance Center in 2018 in previous years. Last year, BU instead participated in the virtual Global Music Month 2020.

“We are all extremely excited to have him on BU Beach and at this point we plan to continue in the future,” Furman said.

He said the outdoor event created a true “festival atmosphere” while adhering to COVID-19 protocols.

The change of location also proved to be a success in terms of attendance.

“We already have [had] 1,300 registrations [prior to the event]”said Amanda Harrington, festival intern.

With an outdoor event, “there’s going to be so much foot traffic,” she said, drawing more crowds than ever.

As part of the project’s initiative to represent, educate and encourage exploration, live art can help celebrate unity through diversity. After a year online, the festival has acted as a vessel “to bring students together,” Furman said.