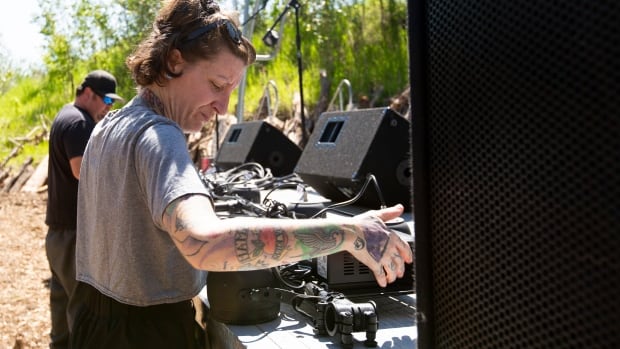 Well, Inspire Fest is a new music and arts festival for all ages that aims to be everything the Stampede isn’t.

“It’s definitely a bit of a counterculture here, and I wanted to have an alternative to the Stampede, especially [one] which is for other people who may not be fans of this kind of music or who don’t really like Stampede culture,” said festival programming director Kenton Doborowski.

The all-ages festival kicked off on Friday July 15 and will run until Sunday July 17.

Inspire Fest is for and by local artists.

“It’s all local Calgarian musicians, bands, vendors, and a lot of the DJs are from here as well. Same with all the people who organize, all the organizers, everything comes straight from Calgary,” Doborowski said.

Cheyanne Summer performs at the festival. She says the opportunity to get on stage is even more important for local artists emerging from the pandemic.

“There are so many local festivals, but there’s not a lot of local talent at festivals. It’s really hard – especially coming out of the pandemic – not having a band rehearsal or live performances under your belt to get the live shows you want to get,” she says.

“So it gave a lot of new artists the opportunity to get the exposure they need to keep moving up the ladder,” she added.

The festival has a food market with local vendors and on-site art installations created by local artists.

Doborowski says the inspiration behind it was the creation of a Shambala-style festival in Calgary – a nod to the electronic music festival in Salmo, BC, run by a team of volunteers.

One of the most obvious similarities between the festivals is their location, with both taking place on farms.

Inspire Fest takes place at Highfield Regenerative Farm, a 15-acre urban community farm nestled in an industrial area in southeast Calgary. The farm is a project to recover and regenerate the once vacant land.

Summer says that’s another way this festival is different from others in the city.

“I think it provides a nice space where you can hang out, relax with family [and] don’t have to worry about a million people jostling on a hot concrete floor. [It’s] a place to go and enjoy nature,” she said.

Nathan Richards is a Highfield Farm volunteer, helping to prepare for the festival. He hopes the festival will bring more attention to the farm and the work it does.

“I hope people will come to this event not only inspired by the tunes and the attractions, but also by the farm itself, the effort that goes into keeping this place going,” he said.

“I hope people will come here and say it’s a beautiful place, I would like to see it prosper,” he added.

STMPD RCRDS and Tomorrowland Music team up for 7-track EP