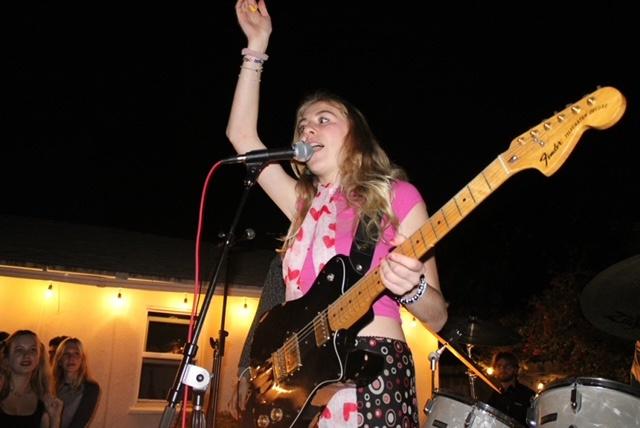 Desiring to make her music known to the world, this young artist found the answers in her garden

True Jackson was just 16 when she recorded her first indie pop album in a backyard garage during the pandemic. Despite all the struggles of creating an album throughout her forties, she never seemed discouraged by her dreams and the challenge of achieving them. Ever since she was a child, she expressed her feelings through songs and always wanted to share them with others.

One year after its release “Simulation,” Jackson’s album of original songs chronicling teenage life in a sudden virtual world she yearned to connect with an audience. Live and in person. Her wish was to perform her surprisingly upbeat songs about what her generation had been through and the isolation they felt.

But where and how was this dream show going to take shape? “I wanted to share my songs and interact with an audience. Hear them sing and see everyone jumping around and having fun,” says Jackson. “Music brings me great joy and I wanted to see people happy and feel a sense of togetherness.”

Jackson motivated himself to do something to keep moving forward. “I was trying to establish myself in the music industry and had actually created music in the middle of a global pandemic,” she says. “Every aspect of my life was virtual and I didn’t want to stare at a computer anymore.”

Still, several roadblocks stood between his live performances. First, its musicians and collaborators lived in Missouri. With their own solo careers, getting them to Los Angeles was a challenge. Second, venues were struggling to sell tickets. They promoted headliners or would prefer to book acts over 21 and would attract older audiences who would buy more alcohol. So it looked like a dead end.

Each week, Jackson reached out to The Mint, Troubadour and Whiskey A Go Go, venues that allow all ages to perform, but to no avail. With most of her other options dwindling, she had an idea. Jackson understood the event had to be held outdoors for security reasons, but she didn’t have a credit card to reserve a venue.

Taking matters into her own hands, she launched a free “backyard” show to finally perform the music from her album. With about sixty happy participants, she thought of another idea that would be collaborative, enterprising and supportive.

Jackson also saw the need to help young independent artists. “My friends made music in the middle of a pandemic, and I thought they deserved to play their music live and get it out into the world as well,” Jackson says. “When I applied to colleges for songwriting and music business, everything clicked. I wanted to take it more seriously.

With an entrepreneurial spirit, she set out to redo a concert, but this time she hoped to infuse more elements. Jackson’s second show became an arts festival with all the girl groups and local artists. Artists marketed their wares, selling their albums. Even a group of high school students organized a photography magazine to sell. Jackson with the music group Jaded the Band and Career Woman, who recently premiered an album on a record label but had nowhere to perform, performed in front of a large audience.

All rehearsals took place in the very garage where Jackson created his album. With a newfound friendship with lead singer Lily Gudas of The Inky Scratches, the two set out to promote the gig on Snapchat and Instagram and booked bands from different high schools. Paco and Jonah Roy came over from Missouri and played their unique new sound. Groups DreTed, Cohort and Swandive also headlined. Leo Blumenfield of established Los Angeles band Not From England joined forces to help with sound and promotion and created a solo piece for the event called Yoshi Circuit.

“As I continued my journey playing live, I look back on that first show and compare it to recent ones,” Jackson says. “The show is still in my back yard, but the most recent one had five bands, ticket sales, merchandise and lots of other people. Neighbors attend for free and after two years of not hearing live music, most of them have even thanked me.

Jackson and Blumenfield hosted the most recent gig. They created excel sheets, monitored ticket sales through Eventbrite, and designed posters and t-shirts to sell. They also checked vaccination status and managed capacity. The two artists are saving money to host their own music festival at a Los Angeles skate park this spring. “We want to continue this music scene in LA, and it would be amazing to give these new artists exposure and create a community,” says Blumenfield.

With each show costing around $700.00 to produce, the young entrepreneurs enlisted Jackson’s father, Josh Jackson, a beloved chef and event planner at Great Taste Catering. He offered advice on how to price the event in square footage, ensure security, and even help them with production insurance. Knowing more about profit margins helped them save money for the next show.

“I grew up with stage fright. But when I’m on stage and the crowd is jumping and singing, that’s when I’m most fearless,” Jackson says. “Plus, I wanted to create an opportunity to reach the audience in my own way and to provide a platform for new artists to grow and share their music organically rather than using TikTok.”

Stage time and stage experience paid off. More recently, Jackson was invited to play a show at The Mint concert venue in April. She also directed a music video for the band Not From England and will play the role of Audrey in a local Culver City production of Little Shop of Horrors. She hopes to be accepted into her dream school, New York University, and is waiting to hear it.

In the meantime, Jackson has no plans to give up backyard gigs and collaborate with young artists. “Gigs are a unique way for me to give credit to indie bands,” she says. “What a joy to bring people together through music.”