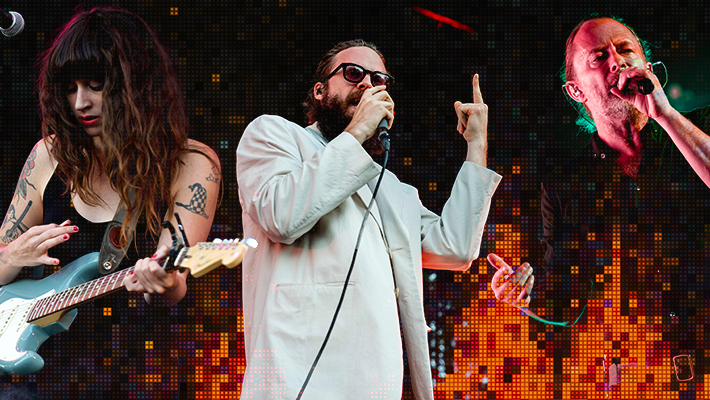 Independent music has grown to include so much. It’s not just music that comes out on independent labels, but it caters to an aesthetic that deviates from the norm and follows its own bizarre heart. It can take the form of rock, pop or folk music. In a sense, that says as much about the people who are drawn to it as it does the people who make it.

Every week Uproxx brings together the best new independent music from the past seven days. This week we got the first taste of a new Father John Misty album, the first single from a Radiohead side project and the final track from Gang Of Youths. Check out the rest of the best new indie music below.

While we’re at it, sign up for our newsletter to get the best new indie music delivered straight to your inbox, every Monday.

Late last year, Waxahatchee (aka Katie Crutchfield) announced that she had written a few new songs for the AppleTV + adaptation of Cece Bell’s acclaimed 2014 graphic novel. El Deafo, a process she called in a statement “an incredible experience all around.” Now, Crutchfield’s original compositions for the series have been released by his label, Merge Records, as a five-track EP. They certainly sound like Waxahatchee songs, but with an added sense of lightness that comes with composing a lively children’s show.

One of the dormant hits of 2021 was To see the next part of the dream by anonymous Korean musician Parannoul. Now, it looks like the same personality behind this record has shared another one, under a different name. Where Parannoul’s music is a catchy indie affair inspired by shoegaze, Mydreamfever’s new EP Rough and beautiful place is a more ambient experience, centered on an enveloping piano and soundscapes.

After many cryptic social media teases that resulted in unmarked vinyl being sent to fans, Father John Misty has officially announced his new album. Chloë and the next 20th century and shared his first single. “Funny Girl” is described by Adrian Spinelli for Uproxx as “full of FJM whimsy, with a homecoming ballroom vibe”.

The smile – “You will never work on TV again”

As Radiohead takes a break, Jonny Greenwood certainly hasn’t. He’s been an almost prolific film composer and is now back with a new project called The Smile, which he formed alongside Radiohead frontman Thom Yorke. The new group debuted on a livestream in May and they have now officially dropped their first official single. “You will never work on TV again” is one of the simplest oscillate songs that the members of Radiohead composed in about 20 years, with “propellant batteries”. [that] move the song forward as Yorke’s musings melt over a wall of washed-out guitar riffs, ”according to Carolyn Droke for Uproxx.

Gang of Youths – “In the wake of your leave”

Gang Of Youths’ Expected New Album Real time angel is slated for next month, and the latest offering is one of the most extensive and exciting previews yet. “In The Wake Of Your Leave” is another meditative reflection on the passing of Dave Le’aupepe’s father, and features what Adrian Spinelli describes for Uproxx as “propelling drums, fine strings, and Le’aupepe’s energetic delivery. [that] showcase the sound of a band of killers firing at full blast. “

two ribbons, Let’s Eat Grandma’s new album, wasn’t released until April, but they didn’t hesitate to give us a taste of what to expect from the LP. “Happy New Year” is an example of the duo’s symbiotic relationship, although it was originally born out of a long rift between them which fully shines through in the tension of the song. “Luscious vocal textures give way to a skipping chorus, celebrating what it takes to make friendship work,” writes Adrian Spinelli for Uproxx.

While many Bonobo compositions for the next album Fragment are instrumental, sometimes there are guests on the song list. Lucky for us, Joji was able to jump on the atmospheric track “From You”, posing a few vocal lines that add to the sonic exploration of the track. The end product is what Adrian Spinelli describes for Uproxx as “a swirling number that plays into the album’s theme that longs for a sense of normalcy amid the isolation of a global pandemic.”

Jana Horn initially self-published her album Optimism in 2018, but now the album is getting a wider release in partnership with No Quarter Records. This is a good thing, because it gave us another opportunity to experience Horn’s beautiful esoteric writing. “Time Machine” is a minimal affair, built on a lightly strummed acoustic guitar and single shaker, with some additional harmonic flourishes.

Last October, Sasami announced his upcoming genre-defying album, Press, promising a palette of sounds ranging from metal to folk pop. The album’s latest offering, “Say It” has an industrial vibe, sounding more like Nine Inch Nails than Julien Baker. “The track opens with a club bang in the basement, before retreating to let Sasami’s voice come to the fore as the blinking drum beat remains,” writes Adrian Spinelli for Uproxx.

Minneapolis-based band Why Not was described to me by a friend as a “postal punk rock (good sounds with bleep bloops)” shared “Casket” earlier this week, which certainly fits that description. . As I’ve written in the past about artists like Kississippi, it’s always exciting to hear a band like this, with roots firmly in DIY / punk, but with a vision that goes well. beyond the confines of the local basement scene. Keep an eye out for Pourquoi pas.

Every new track from Young Guv’s upcoming LP, GUV III, is just as fun and full of energy. “It’s Only Dancin” sounds like a lo-fi version of Cheap Trick and The Cars, which means the melodies are infectious, the choruses are massive, and there’s a great guitar solo. If you’re not yet on the Young Guv Train, you’re going to be left behind!

Some of the artists covered here are artists from Warner Music. Uproxx is an independent subsidiary of Warner Music Group.

Nilüfer Yanya: “I wasn’t thinking: how am I going to make it a TikTok hit” | Music