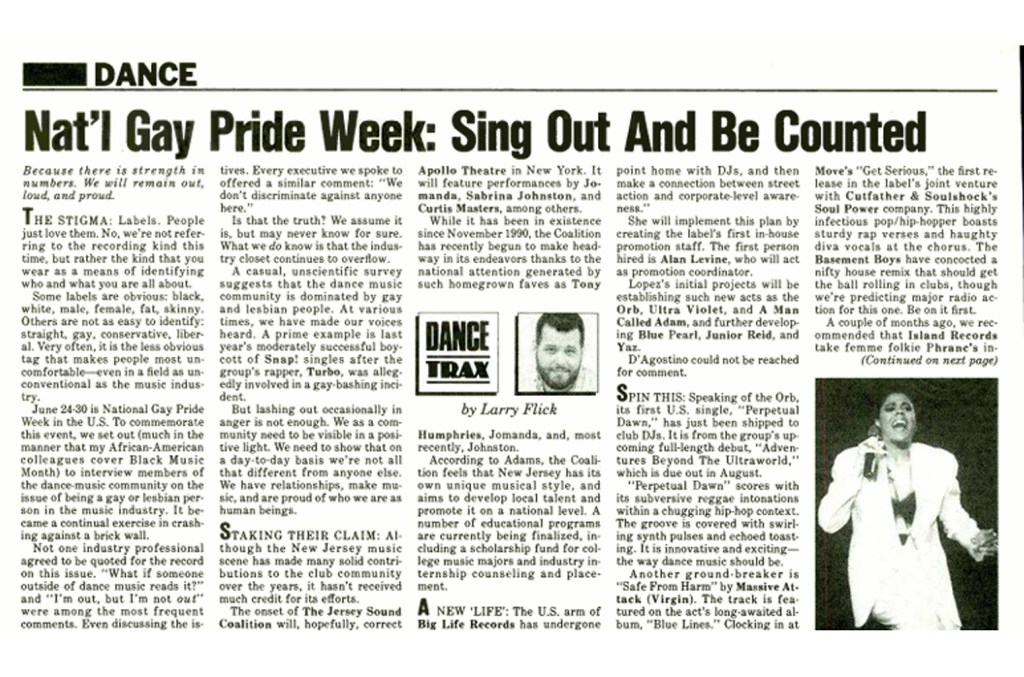 Within 48 hours, the most common and conjunctive period of my professional life had become the most lonely and isolated.

This was in June 1991. I had started a little less than a year as the editor of the dance music of Billboard magazine. Comfortably tucked away on the 39th floor of the same building as MTV in Times Square in New York City, Billboard was the holy grail of music journalism for a child who spent his youth studying every syllable and imagining what his signature would look like on its pages. Walking from the subway through the touristy streets of downtown Manhattan to the daily chaos was often overwhelming. It was the actualization of a fantasy.

The nine months leading up to that moment had been harsh, but magical. Surviving those early days in a job that had been held by journalism icons like Brian Chin and Bill Coleman, who immediately preceded me, was tough. Both had indeed established strong personalities as writers with distinctive and popular viewpoints. After a bumpy first few months, I had started to carve out a little niche of credibility for myself as a journalist, columnist, and industry advocate for a music community struggling for attention.

Back then, the bright, synth-centric era of ’80s post-disco was evolving into the richer, darker hues of house music. Remixers like Frankie Knuckles, David Morales and Steve “Silk” Hurley had begun to prove their mettle as producers capable of turning often sub-par pop and R&B songs into successful club hymns that made their way. in the top 40 radio stations. They have attracted superstars such as Madonna, Celine Dion, Cher, and Gloria Estefan for song finding, while also giving birth to baby dancers such as Crystal Waters, C + C Music Factory, and CeCe Peniston. The labs for these tracks were places like the Sound Factory in New York, the Rage in Los Angeles, and the Warehouse in Chicago, very different clubs with two important things in common: They were populated by gay people, and their customers were seen as providers of future trends. The vigor with which the majors and their top performers have pursued this demographics and genre has provided undeniable proof of their power.

It was a fun and increasingly publicized time to be the dance music publisher at Billboard. The music was amazing, the creatives were at their peak and they were encouraged by a group of industry executives who worked with palpable energy. Perhaps most notably, many of them were gays and lesbians. It was a middle ground that allowed for family energy in the midst of the necessary competition and rivalry. Any given week could include a fierce fight to the top of Billboard‘s Dance Club Songs chart, or successfully land the remix of the day for a project. Either way, there was a dominant feeling that everyone was supporting each other. We were fiercely protective of each other, despite the momentary differences. It was unlike anything I had seen in other areas of the industry at the time. I was convinced that our “brotherhood” was at the heart of the experience. As Stonewall Pride for June ’91 drew nearer, I set out to document the community and these remarkable people for my column.

With every call for an interview, I heard silence – or an incredulous “are you crazy?” No! “I was shocked to find that each person I invited to participate was either secret or” deprived “of their personal identity. I remember urging one particularly flamboyant person by asking,” Don’t you think? that your boss thinks you are straight, does he? “His response?” He didn’t ask. I didn’t say. It protects me and my job. I was stunned by the fear that permeated her. voice, although it had quickly become familiar to me.

With desks and small cubicles crowding everyone in the same open-air space, the Billboard newsroom designed for a lively and easily collaborative atmosphere most days. That day, the normally energizing noise of the conversation gave me a headache. I sat down in front of the blank screen of my big, bulky Dell desktop computer. My planned report on pride and community was in pieces. Finally, I began to freely associate my thoughts and feelings on the keyboard. The result was an essay on the loneliness of being the only full person in my circle of fabulous gay colleagues. I interviewed an industry that was making a lot of money with people who felt pressured to keep quiet. It just didn’t make sense. This is still not the case.

Moments after I sent my column to the editor, I approached Tim White, my editor and mentor. I wondered if I had done the right thing. Did I perhaps make matters worse by calling attention to an unfair, albeit profitable, system? We read the song together, and he assured me that I had done the right thing. I remember his words very well: “This is where you learn the need for journalistic distance from what is clearly a unique situation. Relieved, I returned to my desk and wrote his last words of encouragement in my notebook: “This is a necessary story to tell.”

An hour later, all hell broke loose. A heated conversation had erupted between Tim and our editor. Our editor didn’t think this was appropriate content for the magazine. He found the column too personal and not applicable to the industry. As I got this information, I started to wonder. I had been happily accepted as an openly gay man when I stepped out into my Billboard colleagues almost a year ago. Where did I have? Or was I forced to live a professional “don’t ask, don’t say” existence that I had heard from others? Can I do it? Should I do it?

I realized that the months leading up to this moment had changed me. I had become an activist. Dance music wasn’t just a cool journalistic beat to me anymore. He had become intertwined in a subculture of people. Much like punk and other niche genres, it was the expression of “others” – those people who did not immediately fit into the mainstream. These people had finally started to trust me. In my opinion, part of that confidence was rooted in me telling a story that for some reason they couldn’t. To abandon that column, simply because of the industry’s potential setback and discomfort, sounded like betrayal. The activist I had become could not fold. It left me wondering if my lifelong goal of being on the pages of my dream magazine was unraveling in a haze of homophobia.

Just when I decided I was going to have to quit, I was called into Tim’s office. He and my editor had convinced our editor to let the column run. He wasn’t happy, but he finally saw the need to tell the story. As I left for the day, the editor told me one last thing: “Hope you know what you’re doing.

I did, sort of. This Friday morning of the post, our phones exploded. Yes, there have been angry protest calls. But there were also many calls for support. Stacks of positive letters were sent to the editor and an invitation to speak at the Heritage of Pride gathering was offered. Unfortunately, the column also caused a rift between me and some of my sisters. I had shone a bright light in a comfortably dark corner of the proverbial room. Plus each of those people were associated with me, the now blatant homosexual dude at Billboard. The results were varied. A handful of people sank deeper into the closet, while others saw opportunities for advancement quickly disappear. In fact, a prominent club promoter lost his chance to add cross-radio promotion to his job. Fortunately, some managed to seize the opportunity and called attention to the inextricable connection between their personal truth and professional success and how this could create a profitable gay audience for their performers.

This column has proven to be a beneficial reference in several other respects. The devastation of AIDS has swept through the music business like a tidal wave, especially in the clubs. The need to get out became imperative, especially as I documented the death in our ranks in every column for several years to come. Oh, and that gay dollar got bigger and bigger in the mid-’90s, as labels funded gay-centric marketing departments, just like a series of independent companies pledging queer dollar exposure got big. case.

Five years later, I gathered all those original music executives that turned me down in 1991 for an article on how they finally came out. It was the perfect conclusion to a chaotic and frightening time. I remembered recently with one of those “old time” friends. We laughed at the intensity and romance of that time. He wondered if any of the youngest activists in the industry knew about our history. I said “probably not”.