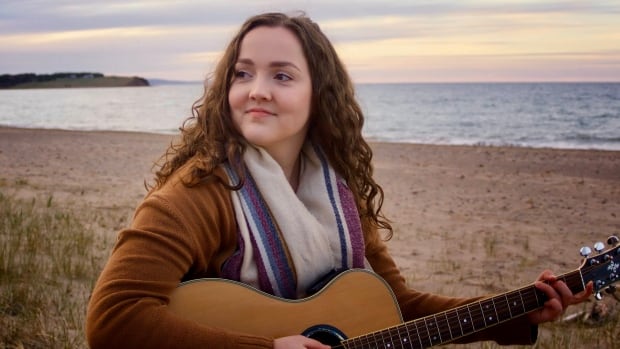 For Rebecca McDonald, watching a palliative care patient’s behavior change as she strummed the notes and intoned the lyrics to a classic Patsy Cline tune is what inspired her to become a music therapist.

As a teenager, she accompanied her mother – an intensive care nurse – to play in an open ward at a hospital in Peterborough, Ontario.

She describes an interaction with a grumpy old man as driving her career aspirations.

“His reaction was the most dramatic reaction I’ve ever seen to music,” McDonald said, detailing how the man went from unhappy and confused to excited and engaged.

McDonald followed her dream and was recently hired as a contract music therapist in the palliative care department at St. Martha’s Regional Hospital in Antigonish, NS. The unit never had a dedicated music therapist.

McDonald, 23, said she hopes to use her art to help people who have received difficult life-changing diagnoses.

“Quality of life can be a difficult thing to address in palliative care,” she said. “But it provides a safe space for them to have that social and emotional expression.”

She said music is a powerful tool and a song can often take people back to a certain time in their lives.

“I’ll play a song and maybe it will spark a story about that person’s family or childhood,” said McDonald, who earned her degree in music therapy at Acadia University in Wolfville, Nova Scotia.

“It’s a way for them to connect with someone through this music.”

Music therapy is much more than playing songs for patients. It is clinical work that applies musical interventions to help people through a therapeutic relationship.

“The highlight of their stay”

The sector is growing in health care across the country.

There are only 3.5 full-time and part-time music therapist positions in the Nova Scotia health system. They are in Antigonish, New Glasgow, Halifax, Dartmouth and Lunenburg, the organization said.

But he noted that there are other positions funded by partner agencies and music therapists working on a voluntary basis.

In a statement, spokesperson Brendan Elliott said music therapy reduces anxiety and pain, improves well-being and promotes social interaction for hospitalized individuals who are typically isolated from the community.

Elliott said taking a “holistic approach” to healing has been shown to have better patient outcomes and an overall better hospital experience, adding that people have described it as “the culmination of their stay”.

McDonald said she often starts a session with a conversation about music, asking things like if it’s important to them and what kind of music they like.

Patients can get involved

She then plays songs at their request – she finds classic country to be a favorite genre in St. Martha’s hospice unit.

“During these sessions, we observe patients’ reactions to music, and sometimes patients want to sing along with you and they want to play, so I’ll bring handheld percussion instruments,” McDonald said.

Music therapists can also help patients write songs to express their emotions or to leave a message.

“It can be very empowering for people to hear their own words in music, because lyrics are so important to so many people,” McDonald said, noting that March is Music Therapy Awareness Month in Canada.

“It’s something that sticks to their skin.”

Tom Curry has been a music therapist at St. Martha’s for nine years and at schools in Antigonish, a college town of about 4,300 people.

Curry, who works in acute care and geriatric rehabilitation units, said music therapy can have a big impact in small communities.

He described being stopped on the street by grateful people, telling him stories of how he helped their dying or sick loved one through a difficult time.

“It’s those little things that are those little moments of realization that what I’m doing is making a difference,” said Curry, who attended St. Francis Xavier University and has remained in the community ever since.

“It’s important that we bring people together in the community – let them know they’ll be okay.”

Elliot said staff at St. Martha have noticed a marked difference in patients since Curry began working there.

“We’ve seen patients in stroke and geriatric rehabilitation units get up, get dressed, put on makeup and go to group sessions in the hallway after music therapy sessions,” he said, adding that doing these kinds of activities supported a patient’s discharge from the hospital.

Curry – who has helped champion McDonald’s position over the past year after completing his 1,000-hour internship with it through the Canadian Association of Music Therapists – said he felt a responsibility to defend music therapy and its benefits.

He hopes the work being done in St. Martha will serve as an example of how music can be applied in health care settings in rural communities across the province.

“Music is for everyone”

McDonald currently has a six-month contract with Nova Scotia Health, so part of his job will be to track the impact of music therapy on the unit through surveys and testimonials to help advocate for the permanency of the unit. job.

“Early indications show that this is a program that would provide many benefits to patients across the province,” he said.

McDonald said she was grateful to start her career at St. Martha’s to help build on the work Curry has done in the community over the past decade and to help the field grow.

“It’s something that brings people together,” McDonald said. “Because music is for everyone.”