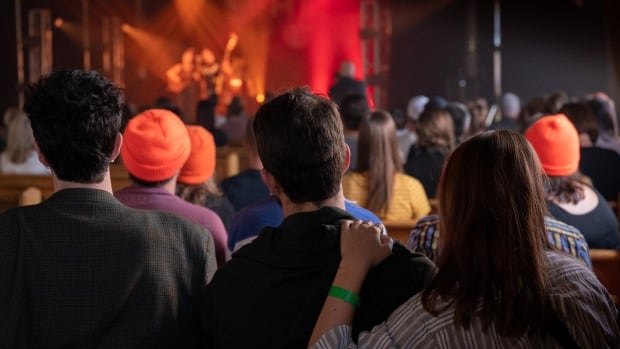 This first-person article is the experience of Caitlin Stall-Paquet, a Montreal writer. For more information on CBC’s first-person stories, please visit the FAQ.

Descending through the clouds on a small plane filled with people from the media and the music industry, I see the vast conifer-dominated boreal forest surrounded by felled swaths. We traveled 630 kilometers northwest of Montreal to Rouyn-Noranda, Quebec, the national brass capital, for the Emerging Music Festival (EMF).

Although this is my first time attending the festival, it is not my first time in the region otherwise known for its mining and forestry industries. This is where my father grew up, where he took my brothers and I 25 years ago to show us the lakes and woods of his childhood and it is a landscape I have wanted to return to since his death. in 2017. This Labor Day weekend – a relatively quiet time in the pandemic storm – is a time for a late comeback as we collectively try to redefine normal.

From the moment we step into the shuttle, it’s clear that FME is rooted in the community, as the volunteer drivers regale us with stories of past editions. Co-founder Jenny Thibault points out that the non-profit festival would not be possible without these volunteers. The community effort in the eclectic and inclusive event dates back to its pre-Spotify origins, when the founders wanted to bring indie music home rather than always having to travel to the big cities. It has changed the culture here since my family called it home.

Thibault says part of the festival’s legacy in the region is turning more people into engaged music lovers, who now sometimes suggest new artists to organizers. Although it has become the city’s biggest weekend of the year, FME’s modest primary goal is to build memorable lineups while remaining profitable.

After a very sober festival in 2020, this 19th edition is a step towards a return to normalcy, with limited reception capacities and the new Quebec vaccination passport made visible in the form of green plastic bracelets. Some differences caused by COVID may turn into more lasting changes, such as the inclusion of more English-speaking groups from outside the province, as travel for European artists is currently not possible. This overcoming linguistic divides is something Thibault has been trying to do for years, and it reminds me of my French-speaking father from this predominantly French-speaking region, who told me that he considered himself bilingual.

One of the opening night programs, at the Poisson Volant outdoor stage on a shore of Lake Osisko, is full of linguistic diversity. There, Toronto’s Pantayo quintet, from the Filipino diaspora, performs a set combining traditional gongs and kulintang drums with groove synth lines and addresses the crowd in Tagalog. There is excitement in the air for this expected return to the stage for many artists, and our own return to the crowd.

When the Canadian-Congolese musician Pierre Kwenders comes out, opening with the song “Rendez-vous” from his 2017 Makanda at the end of space, at the beginning of time, he tells us how happy he is to see us again after so many months, “it’s a date“- it’s a date, he says. People are there to meet too, dancing to his sexy tunes which deliver his singular indie-afro electro with lyrics in Lingala, French, English, Tshiluba and Kikongo.

My father would have marveled at these sounds echoing in his hometown built around the copper mine that was active until his teenage years. I imagine him next to me, discreetly doing his characteristic awkward mix (like a real Quebecois dad, he was more used to Jethro Tull – he even played the transverse flute), alongside visitors and young people. local parents with breast-sleeping babies, all dancing.

The shift in Canadian programming also brought my friend Tom McGreevy from Toronto on stage at the Last Chance Cabaret, which has been hosting shows since the early 1980s, along with his band mates from Ducks Ltd. When a barefoot Tom proclaims his joy to be in a province it is so beautiful“after a hiatus from the scene since 2019, the count of months turned into years is adding up in my head. They quickly enter the title track of their EP” Get Bleak “which strikes a clever balance between desperate-centric lyrics and sunny jangle-pop melodies – a timely combination that I danced to alone in my kitchen during confinement.

The main area occupied by FME in Rouyn-Noranda is compact – a 20 minute walk will get you almost anywhere in what looks like a sonic playground. Surprise shows are played everywhere, from DJ Gayance spinning in the parking lot of the institution of poutine Morasse (the site of the festival’s first spontaneous show by Frannie Holder of Random Recipe) to the backxwash artist, Polaris winner, who meets hardcore and hip-hop. a garage with its door wide open. This pop-up format binds locals to FME, highlighting how the festival and venue are one.

Thibault tells me that these spaces are often offered free of charge, recalling a story of helping his neighbor in the often inhospitable environment of Abitibi.

On a gray afternoon, I walk east past FME’s central hub to a personal landmark, the airy notes of a wandering middle-aged flautist fading as I go. As I turn onto verdant Chadbourne Avenue, I remember memories working in mysterious ways, sleeping in the hippocampus until the stimulus returns to rekindle them. I had forgotten that the tin roof of the house my father had grown up in was orange until I saw it. Standing in front of the modest house, I imagine the eight members of my family living here, half of whom are now gone. I imagine my aunts, uncle and father running along this sidewalk I stood on 22 years ago as now, throats tight, all ghosts in a time loop.

The memory of the orange roof echoed the night before, after walking up Eighth Avenue through an alley punctuated by the piles of the Horne copper smelter, like a smoking umlaut. The pulsating beat of psychedelic Montreal post-rockers Yoo Doo Right bewitched a small crowd at a sidewalk pop-up show that got louder until I got into it. The stimulus returned; I realized how much I missed being in the exploding radius of an amplified guitar and bass, flooded with sound. I had forgotten that feeling until I felt the waves reverberate off the water in my guts.