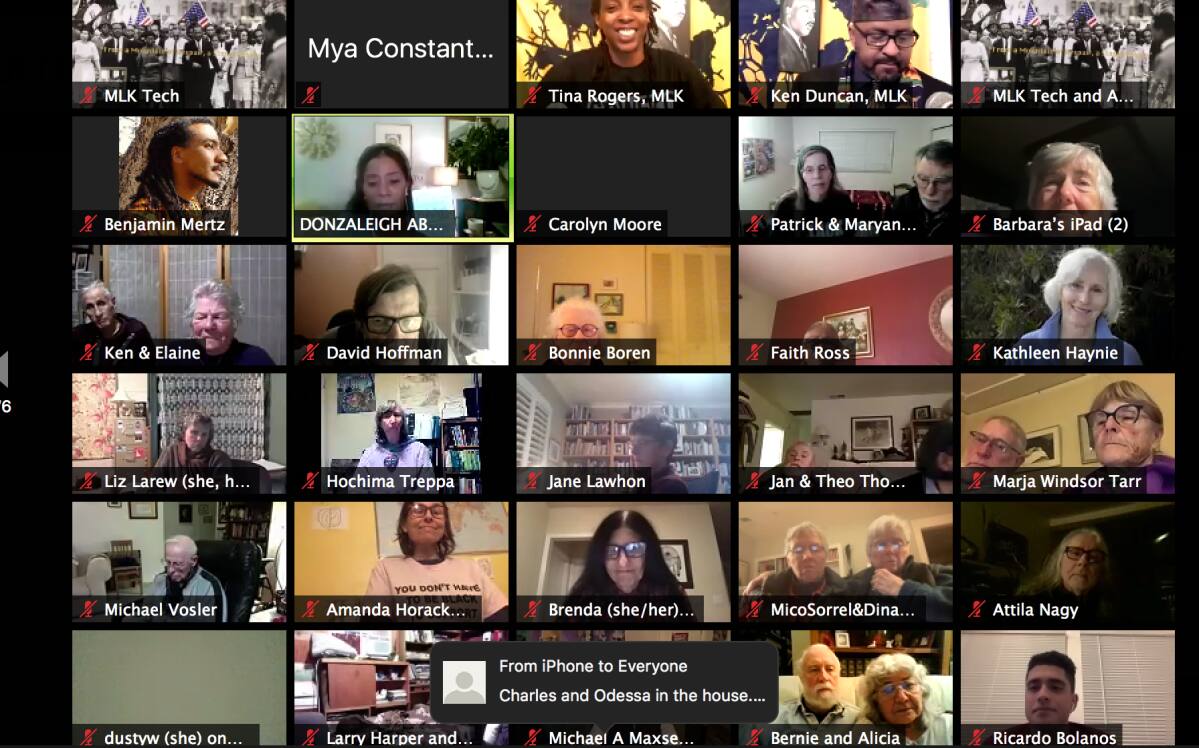 Nearly 200 people attended the virtual event, hosted by the MLK Birthday Committee, a Sonoma County-based group that first hosted the celebration in 1981. The committee’s goal is to raise awareness of issues relating to human rights by supporting organizations that exemplify Dr. King’s ideals, officials said.

“He was the embodiment of love and joy,” Donzaleigh Abernathy said of King. An actress, author and civil rights leader, she was one of the evening’s featured speakers.

His father, Ralph Abernathy, was a close friend and mentor to King’s. They worked with others to create the Montgomery Improvement Association, which organized the year-long Montgomery bus boycott that began in December 1955. He was also a co-founder and executive board member of the Southern Christian Leadership Conference. King served as the organization’s first president.

A big part of Sunday’s event was also to rally support for voting rights legislation being considered in Congress that aims to expand access to the ballot box nationwide.

“When an assassin’s bullet sounded, the silence came and was deafening. The joy was gone. And we faced a crisis like the one we face in the country today,” Donzaleigh Abernathy told those present.

She spoke about the memories she shared with the late civil rights leader and her thoughts on the importance of the right to vote.

“He gave his life to service and humanity and gave me the freedom to use the bathroom wherever I want, to vote and now – from the grave – he asks us to give back. He asks us to do our share,” Abernathy said.

The event was full of slideshows of images of Reverend Dr. Martin Luther King Jr. walking with thousands of others. An animation accompanied by music also showcased King’s contributions to the American civil rights movement.

The event included musical performances by Benjamin Mertz, a pianist and singer from Sonoma County, who sang and performed songs about justice, freedom and equality.

MLK Jr. Day is celebrated on the third Monday in January and honors King’s life and his fight for racial equality. It was officially declared a national holiday in 1983 by then-President Ronald Reagan.

Another Sunday night highlight featured high school students sharing the impact King’s contributions have had on their lives.

A high school student from Maria Carrillo, Ricardo Bolanos, shared his thoughts on Martin Luther King Jr.’s final speech, “I’ve been to the top of the mountain.”

King gave the speech at Mason Temple in Memphis, Tennessee on April 3, 1968, the day before he was assassinated.

“There are a lot of giants we face today. No matter how intimidating this giant might be, a giant of hatred and racism, Martin Luther King still reached into his pocket for a stone of hope and joy and looked into this giant’s eyes and threw that rock,” Bolanos said Sunday night.

“We too can pick up our stones that we have collected on our mountain of life and keep moving forward. We must use our voices and bring down the giant that stands before our community and our society today,” he added.

This event would have helped spruce up the neighborhood park, but was postponed by Sonoma County Regional Parks due to a call from Sonoma County Health Officer Dr. Sundari Mase, who asked residents to voluntarily shelter in place as much as possible, said John Ryan, a volunteer. coordinator with the network of parks.

You can reach editor Mya Constantino at [email protected] @searchingformya on Twitter.

The Neiman Marcus Band celebrates the spirit of Dr. Martin Luther King Jr. through a partnership with Boys & Girls Clubs of America