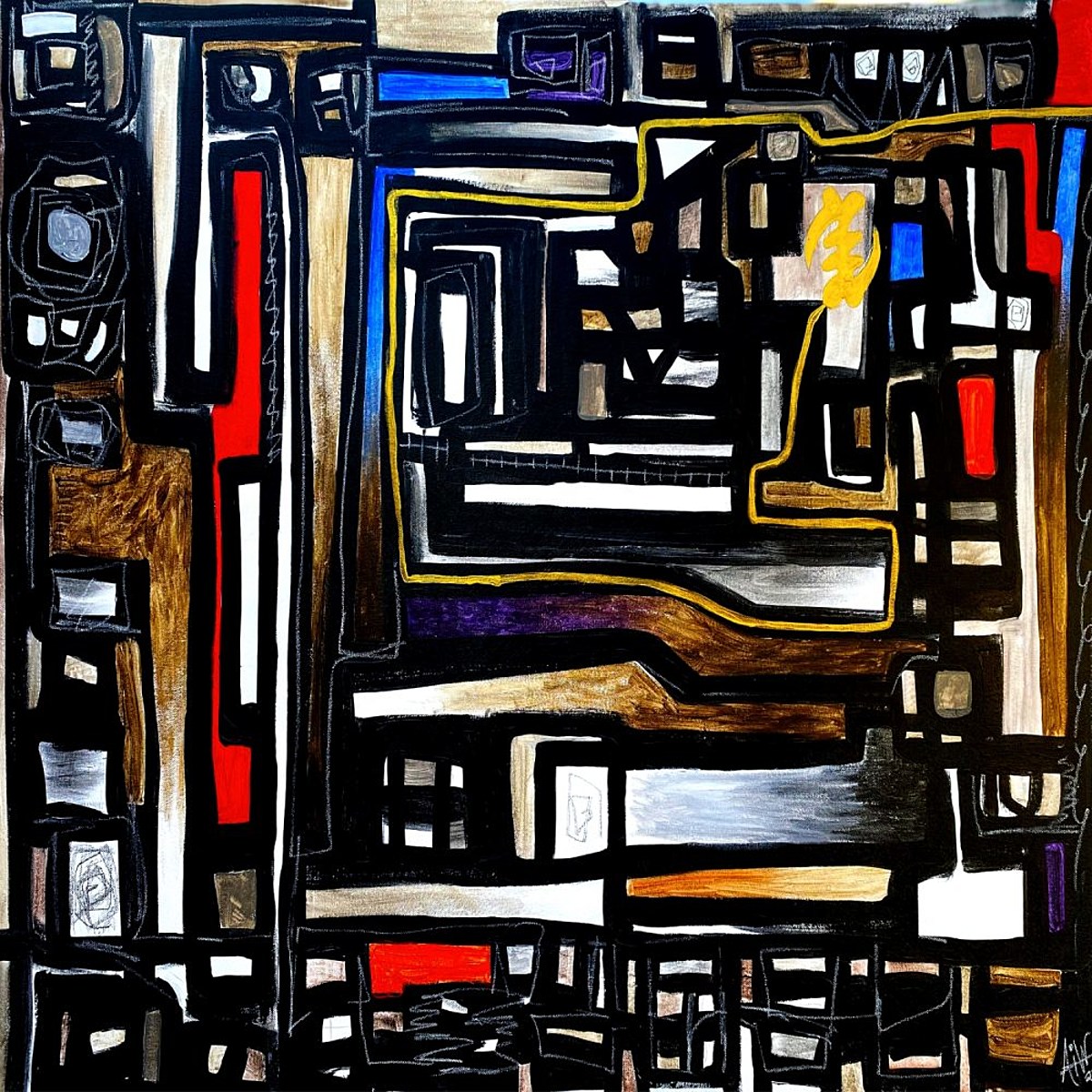 So many artists, so little time. Every week we review a handful of new albums (from all genres), round up even more new music we’d call “indie” and talk about what metal comes out. We post music news, track premieres and more all day. We are updating a weekly playlist of some of our current favorite tracks. Here is a daily summary with a bunch of interesting and recently released songs in one place.

Modern jazz great Kamasi Washington makes his late night TV debut (2/2) on fall on, and ahead of that, he shared a stunning new song, “The Garden Path.” Speaking of this, he says, “The world seems turned upside down. There are so many pushes and pulls in every direction, from everyone you meet, no one knows what to think, who to believe or how to approach. life right now. No matter how smart you are, it’s hard not to feel blind.”

CHAI’s remix EP WINK Together was released this week and one of the highlights is this remix of “PING PONG!” by French Touch icon Busy P. He of course takes it into disco territory, and there’s also a very cute 8-bit style video with it.

“The meaning of ‘nothing’ in the context of this song is not about uselessness, but about being lodged in something we can’t understand and yet accept/or not accept it”, ADULT. said of their new single. “We collectively live in liminality. And personally, we are happier right now to be in a state of nothingness. ADULT’s new album. Come undone releases March 11 via Dais.

Los Angeles-based singer and songwriter Yael Kaufman has released a new EP under the name Yes Kid, Lighten. It was produced by Sarah Tudzin, of the Illuminati hotties, and it should appeal to her fans and Rilo Kiley, as well as those who like catchy indie rock seasoned with a bit of emo and pop-punk. “I had just started therapy and discovered that I had generalized anxiety disorder,” Kaufman said. under the radar. “At the time, I was in a constant swing of anxiety highs and drained lows. It was exhausting. So I guess the name ‘Lighten Up’ is kind of a joke. I really hate it when someone one tells me that, you know? Haha. But my days were getting a little lighter, so I guess the joke’s on me! I finally had some good days alongside the tough ones. I guess I have the feel like this EP takes you through it all – ups and downs and low downs, all those things you’re forced to face when you really look inside, yada yada yada.”

Speaking of Illuminati hotties, she’s set to go on tour with Fenne Lily, and before that, she shared this upbeat new single. “‘Sandwich Sharer’ was written on the edge of the unknown – I was looking for a teammate at a time when I felt swayed by the nostalgia of youth as opposed to the reality of life’s momentum,” says Sarah Tudzin . “And it’s so good to be around someone who knows you so well, it’s like you finish each other’s…sandwiches.”

Australian Psychedelic Porn Crumpets will release a new album night dwarfs on April 22 via What Reality? A big part of the album is trying to figure out what the F#@! is happening, in life in general and obviously the period of time that we have all found ourselves dormant in for the past couple of years. I started reading some quotes from philosophers because, hey! They might know what’s going on, but most of the time it was a bunch of cleverly phrased gibberish that was drenched in self-agitation which luckily, unbeknownst to me, was the thing in which I found comfort. Let no one have a clue what life is all about and we’re ‘all good as it goes!’ Check out two catchy tracks from the album now.

Alabaster DePlume has announced a new double album, GOLD, scheduled for April 1 via Anthem International. It was made with over 20 musicians (including Sons of Kemet’s Tom Skinner and Radiohead’s new offshoot, The Smile), and two songs have now been released: the eerie, spoken-art pop of “Don’t Forget You’re Precious” and the jazzy, wordless “The sound of my feet on this earth is a song for your spirit”.

Korn’s new album Requiem comes out this Friday (2/4) (Pre-order), and here’s another single, “Lost in the Grandeur”. All these years later, no one has a voice quite like Jonathan Davis, and if you like their melodic songs like “Freak On A Leash” and “Got the Life,” you’ll probably like this news.

The ska-punk titleholders of Queens keep releasing singles, and this one is a darker, minor song with definite rancid vibes. Cool stuff.

El Ten Eleven is about a month away from releasing their previously announced album new year’s eve, and their supporting tour is underway. Today brings new single “The Time Knife”, a synth instrumental with some Berlin trilogy Bowie atmosphere of the time.

Blue Hawaii’s new EP My best friend’s house is due out later this month via Arbutus, and they shared the disco-embracing title track.

HOMEBOY SANDMAN – “THE ONLY CONSTANT”

Homeboy Sandman Follows “Keep That Same Energy” With Another Track From His Upcoming Illingsworth-Produced EP there in spirit (from 2/25 vis-à-vis Mello Music Group), and it finds Sandman delivering thoughtful bars against a relaxed, jazzy backdrop.

String Machine shared another song from their upcoming album Hallelujah hell yeahand this one has more of a catchy indie rock vibe compared to the post-Arcade Fire baroque pop of the previous singles.

Bottom Bracket is an emo band from Chicago, and they’ve clearly absorbed the sounds of their hometown’s emo history, as you can hear in the math guitars and anthemic hooks of new single “Phantom.” This is the first taste of the next EP A figure in armordue February 18 via Rat King Records.

Maria Chiara Argirò hails from the British jazz/electronic scene, and she has an upcoming tour with artist Emma-Jean Thackray. If you like Emma-Jean’s great 2021 album Yellowyou’ll probably also like Maria’s new single “Clouds”, her first for Innovative Leisure.

UK dreampop veteran of Dubstar, who had a hit in 1992 with “Stars,” will release their fifth album, titled Of themMay 6. “Token” has that anthemic dance sound you associate with the band still intact.

Former Fucked Up guitarist Ben Cook is devoting all of his musical time these days to his power-pop solo project, Young Guv, and is releasing VGU III on March 11 via Run For Cover / Hand Drawn Dracula. The “Good Time” chime is reminiscent of the early 90s jangle of Matthew Sweet and The Posies.

Malmö, Sweden, does garage rock inspired by 60s girl bands and the Nuggets. “We Ride the Universe” is the title track from their new album and is sure to get your engines revving.

Guided by Voices will release their 35th album, Cathedral of the Crystal Sisters, March 4 via GBV Inc, and here’s another patented earworm from Robert Pollard. “Never Mind the List” leads with very moving guitar chords and features a spiraling melody that doesn’t quite follow the traditional verse-chorus-verse structure, but is catchy as hell nonetheless.

Röyksopp’s new “concept project” (it’s an album) will be released on April 29th. This glamorous new single is perfect for Goldfrapp’s seductive vocals.

Rolling Blackouts’ third album Coastal Fever, Endless pieces, out in May via Sub Pop. Here is the first single.

THE JAZZ BUTCHER – “RUNNING ON FUMES”

We lost Pat Fish, aka The Jazz Butcher, last year, but he left us a new album, The tallest in the country, which is out this week via Tapete. This lovely video for “Running on Fumes” features all kinds of Easter eggs for Jazz Butcher fans.

London-based electronic musician Loraine James has announced a new self-titled album as Whatever The Weather, and you can read more about the album and lead single “17ºC” here.

ON THE DOWN – “REAL GREEN DOLLARS”

Downward’s new song is crackling folk slowcore that sounds a bit like a cross between The Microphones and Duster, and you can hear more about it here.

Chaotic and cranky bands Thin and The Wind in the Trees are releasing a split on Twelve Gauge, and you can stream a track from each now. Learn more here.

In addition to announcing a tour with Chamberlain, LAPÊCHE has released a new song and you can read more about it here.

Lucy Dacus followed her excellent 2021 album home video with a new single, “Kissing Lessons”, ahead of his tour with Indigo De Souza.

BERTHOLD CITY – “ONLY THE TRUTH WINS”

Berthold City – the hardcore band fronted by Strife guitarist Andrew Kline that also includes members of Internal Affairs, Abrasion, and more – have shared a new ripper from their upcoming debut album When words are not enoughand you can find out more here.

Looking for even more new songs? Browse the archive of new songs.