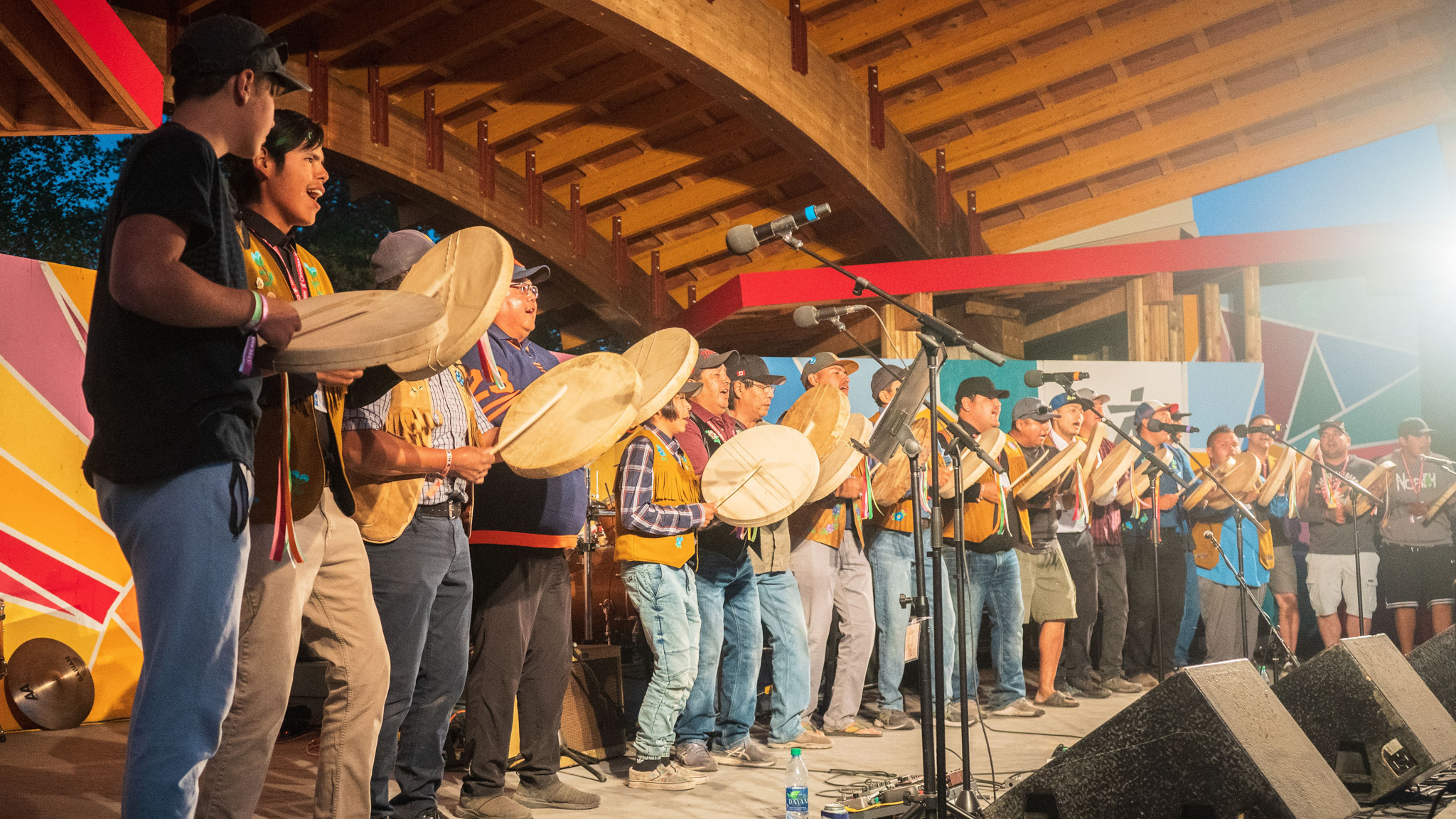 An induction ceremony was held Saturday at the inaugural NWT Music Awards ceremony at the Explorer Hotel in Yellowknife, a gala that also honored winners in 10 categories.

The Yellowknives Dene Drummers, the first inductees into the Hall of Fame, have been hailed as “cultural icons and leaders” whose presence at many events provides an important introduction to First Nation culture for visitors and new arrivals.

Cody Drygeese, who accepted the induction on behalf of the drummers, described being taught to drum by his father.

“He was my first teacher…and I hope he’s as proud of this award as I am,” he said.

The drummer hopes that in the future, this award will help maintain awareness that Yellowknife is on traditional lands and the meaning the drum has for the Dene First Nations of Yellowknives.

“In the past, drumming was always a way for people to come together because we were nomads, we always traveled the territory following the caribou, following our food. Drums and drum dances have always been our way of celebrating each other, seeing each other again after six months apart and celebrating that we are all together.

“Our ancestors were strong people. They have survived wars, pandemics and colonialism. We are strong and we are still here, and we are happy to continue to celebrate this practice with each other and to share with the people who live here in Yellowknife.

Juno-nominated musician Ted Wesley, co-founder of Folk on the Rocks who died last December, was the second inductee.

Heather Pritchard, Ted’s sister-in-law, accepted the award on his behalf.

Pritchard said: “Ted’s first reaction to this would have been, ‘Why me? There are so many other people who are so good. But we know why him, and I think with his passing in December, it was time for them to recognize him.

Pritchard plans to present the award to his wife, Leslie, who she says is thrilled with the recognition from her late husband, who moved north to work at the Discovery gold mine in the 1960s before becoming the first NWT musician to be signed by a major record company in 1972.

His third album, North of Canada, sold over 70,000 copies and earned him a Juno Award nomination for Male Country Singer of the Year in 1977.

After: Musicians of the Midnight Sun explores the career of Ted Wesley

“We did a number of things to honor Ted,” Pritchard told Cabin Radio.

“From family gatherings to listening to his music and looking for old recordings of him, it’s just a great way to keep honoring him.”

Norm Glowach was the final inductee of the evening, an honor that reflects decades of dedication to the music industry in the Northwest Territories.

Glowach, a member of the blues-rock group Priscilla’s Revenge for 15 years, has nearly a dozen albums and some 350 compositions to his credit while offering his services as a sound engineer.

He performed at the Vancouver 2010 Winter Olympics, performed for the late Queen Elizabeth II and recently brought his family history at the Yellowknife stop.

“I never really got into this business for the awards, it’s the joy of playing music and seeing people smile and working with artists and helping them create,” he said. told Cabin Radio.

“The great thing here is that Music NWT is doing a wonderful thing for the community, both the music community and the whole community in the North.

“There’s no money for musicians, so it’s important that things like this reward people so they feel it’s worth it. It’s something that was missing unfortunately, but now we have Music NWT and I hope they persist.