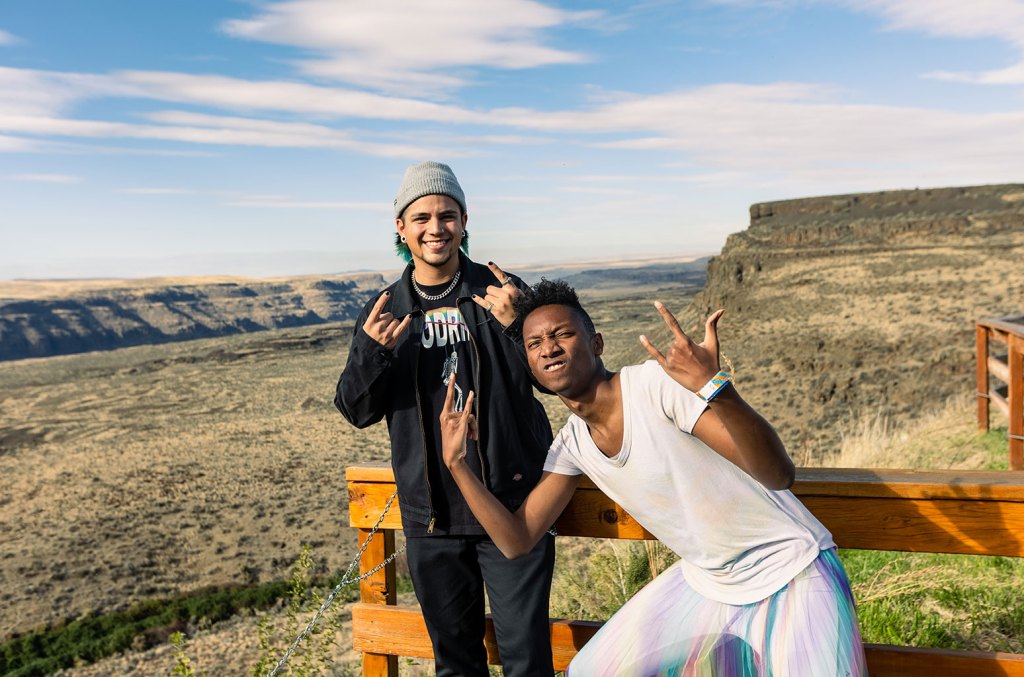 The story goes that in 2016, Anthony Baca was managing another artist who received a message from a producer named Omar Davis asking if he could remix the artist’s track. Curious, Baca, now 27, dove into the artist’s DMs and found Davis’ message, marked “11-year-old DJ/producer.”

“At that point, I was intrigued,” says Baca, manager at Prodigy Artists. “I started scouring all of Omar’s social media and thought, ‘No way is this kid so young’ – given there were hardly any pictures of Omar online.”

Then Baca came across Davis’ first mixtape and was “completely in disbelief that this kid is making such great music,” he says. “I’m not even blown away by the fact that they were so young, but the music was competing with the people who were dominating this space.”

Baca reached out to Davis on Twitter, questioning Davis’ legitimacy and asking if the 11-year-old had a ghost producer or was buying tracks. “The response I received was the most embarrassed I’ve felt to date,” laughs Baca. “They came into my house and cursed me and said they would show me evidence – and I believe they even sent a video of them working on something. From that moment I knew at what Omar was destined for.

In the six years since, Baca has helped guide Davis’ career, with the artist – who makes bass music like Moore Kismet – exploding mightily in the electronic music space over the past couple of years, especially and releases his first album, Universethis last Friday (June 24.)

Their professional relationship was initially casual, with Baca offering Davis and their mother pro bono support and advice on how to put on shows and release music. “I started as a mentor,” Baca explains. The idea was to teach Davis the ‘ins and outs’ of the music business “So by the time they’re a young adult, they can know this industry like the back of their hand.” Once that trust was established, Baca was the natural choice to manage Davis once they landed a record deal. In the four years since Davis officially signed with Baca and Prodigy, Davis and their mother – affectionately referred to by the team as “Momma Kismet” – have become family. Baca calls her mum.

“I picked them up and drove the two hours to their place and back to LA just to take them to a studio session or a meeting,” Baca explains. “I’ve been there for them and mom to help them out whenever needed.”

Part of the job was also to help Davis deal with that fire in her belly — an obvious asset, but one that needed to be deployed with care, especially when it came to their online interactions.

“They have a certain hatred for being POC and queer, and that really led to Omar coming back to people pretty strongly,” Baca explains. “There were a lot of conversations [about] just help them understand the position they’re in and make sure to fight back with positive reinforcement so they can be someone who can help change this landscape we find ourselves in.

Davis also taught Baca a few things, like what “pansexual” meant when they first came out. Baca admits it’s been “difficult” at times to “learn the ins and outs of the LGBTQ+ community, what each letter stands for, and more.” Davis’ safety is also always top of mind when deciding where they can perform and protecting them from hostile or even violent crowds.

“Learng which cities we should visit and what offers we should look into to see if it is a welcoming part of the country [is crucial]explains Baca. “We take Omar’s safety very seriously.”

There’s also the delicate task of getting a teenager to perform in an environment where the majority of the audience is usually under the influence of alcohol or drugs. Davis is only 17, so there’s no booze on their jumper, and mom and Baca taught them what to expect when mingling with crowds at festivals like Coachella, EDC Las Vegas, Bonnaroo and Electric Forest – which they’ve all played this festival season.

“We just had to help Omar understand that the fans are here to have fun; it’s their escape, just like the stage is for them [Davis]explains Baca. “Whenever we go into the crowd, we make sure that Omar is surrounded by one or two people, just in case they feel uncomfortable.”

As a young manager himself, it was a learning curve for Baca and Davis as they navigated the music industry together. But having an artist as talented and ambitious as Davis as a client makes the journey easier.

“Sometimes I’m just in awe of what they want to do and create for the world. Hunger never stops for Omar,” says Baca. “But we’ve helped empower them to be the young adult they are. We want them to experience the world, do it for fun, and leave the work to everyone else.