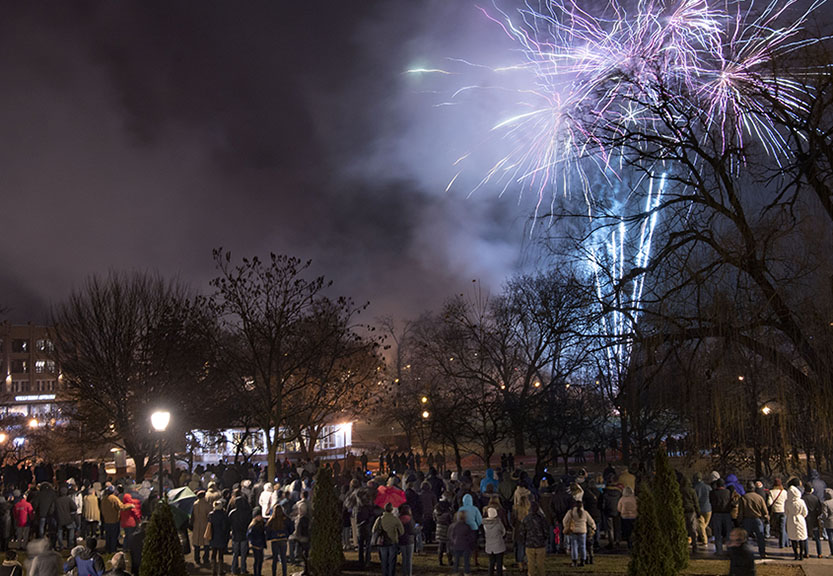 Saratoga Springs will host a New Year’s Eve celebration, but it won’t be the first night.

Instead, “Saratoga New Year’s Fest” will ring in the holidays with live music, comedy and fireworks.

The new event is billed as a reimagining of First Night Saratoga. Organizers include the County Chamber of Commerce, Downtown Saratoga Springs, Discover Saratoga, the city and The 398Group, an event development company.

It is expected to start around 1 p.m. on Saturday, December 31 and end at midnight. It will resume at noon the next day and continue until 6 p.m. Touring national bands, as well as local bands, will perform at venues around the city. There will also be comedy shows, dancing and competitions. Unlike previous celebrations, alcohol will be served at some venues.

The fireworks will return, as will the popular road race, although it takes place on New Year’s Day rather than New Year’s Eve.

For years, First Night was hosted by Saratoga Arts, a nonprofit arts center. However, the organization has not held the event since 2019, in part due to the pandemic.

When Executive Director Louise Kerr came on board in August 2020, one of the first things she was asked was the future of the New Year celebration. That first year it was canceled due to COVID- 19 and, the following year, Kerr realized it just wasn’t something the arts center had the resources to pull together.

“I decided we didn’t have the bandwidth, or the staff, or the finances to plan anything for 2021,” she said.

The news sparked frustration among some community members. Kerr believes, in part, because of a misunderstanding of the role Saratoga Arts played in the creation of First Night Saratoga.

“A lot of people thought it was partly funded by the city somehow. And none of that is true,” Kerr said.

Saratoga Arts provided the money to put on First Night and had a full-time staff member spend six to eight months out of the year planning the event, Kerr said. The organization was also responsible for recruiting 140 volunteers to help with its operation.

This costs the arts center about $100,000 each year, a sizable portion of its $600,000 to $700,000 operating budget. They usually aimed to recoup that cost through button sales and sponsorships.

“But when I looked at the financials, I think the most they ever made was $6,000. More often than not they were losing money,” Kerr said.

It made no sense for Saratoga Arts, which was trying to recover from the hit it suffered during the pandemic, to continue hosting First Night, according to Kerr.

In the spring of 2021, she met with leaders from the Saratoga County Chamber of Commerce, Downtown Saratoga Springs, and Discover Saratoga, among others, to let them know the arts center would not be planning First Night.

The organizations tried to organize an event for 2021 but ran out of time to book groups, according to chamber president Todd Shimkus. This year they had more time to plan and had the help of additional organizations, as well as Robert Millis of The 398Group, who planned many more festivals and concerts.

“We’ve all been talking about wanting to do this now for two years, and the support of the city and Robert [Millis’] the professional expertise really pushed us towards what’s possible for this year,” said Shimkus.

Early in the planning, he suggested they drop the First Night name and introduce more national acts.

“We wanted to make a bit more noise on the music side,” Millis said. “We wanted to start bringing in national acts, instead of just local acts.”

Beyond the music, Millis added there will also be a variety of activities and performances.

“That was always the First Night spirit, that there was great variety. And we’re going to do that,” he said.

“We have enough partners to help us out with volunteers and we’ve had a host of incredibly generous organizations that have volunteered to make sure we don’t lose money, because if we lose money it’s doesn’t sustain itself and then it goes away next year,” Shimkus said.

More information about the event will be announced later this week, including some of the names of the national acts that will be performing. General admission tickets purchased in advance are $20, then $25 closer to the event. Children under 16 can participate for free. There are also VIP packages.

More from The Daily Gazette: