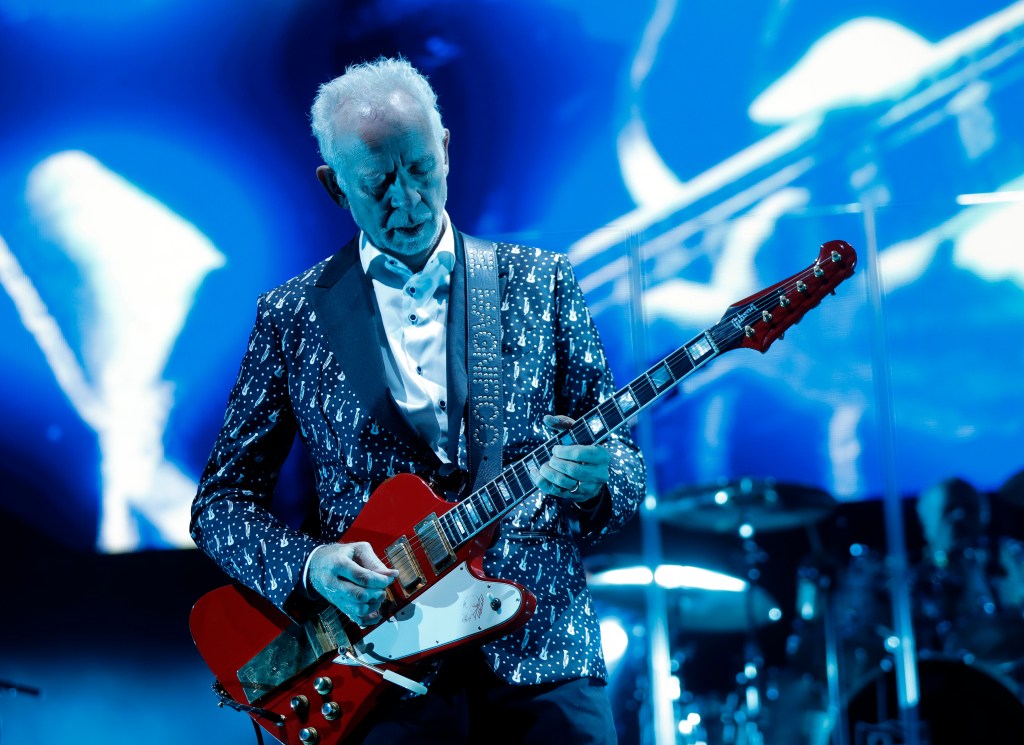 There was so much to celebrate.

It was the penultimate date of the band’s 2022 North American reunion tour – which ends Wednesday at the Kia Forum in Los Angeles – marking the 50th anniversary of the release of groundbreaking debut album ‘Roxy Music’. “.

On top of all that, charismatic leader Bryan Ferry was celebrating his 77th birthday at the Chase Center.

Then, of course, there was the setlist, filled with 18 wonderful songs that most local fans probably never thought they’d hear from this Rock and Roll Hall of Fame act again.

The band – which consists of longtime members Ferry on vocals and piano, Phil Manzanera on guitar, Andy Mackay on sax and oboe and Paul Thompson on drums, plus several touring musicians – sounded superb as they took the stage and began rocking through his first Bay Area date since an August 5, 2001 show at the Concord Pavilion. (The group’s previous SF date was over 45 years ago – on June 11, 1977, at the legendary Winterland.)

Each member of the versatile 13-piece ensemble contributed greatly to the overall success of the 90+ minute set. Yes, that includes the charismatic crooner Ferry – who received criticism for his vocal work on this tour, but certainly did an admirable job in San Francisco.

All in all, however, this evening would end with the show of Phil Manzanera, who delivered one fiery lead after another at the Chase Center and once again underlined that he deserved to be ranked among the best guitarists. of the planet.

His playing must have been a revelation to those primarily familiar with Roxy from “Avalon” – the sophisticated 1982 pop release that features nice fret work, but hardly ranks as a “guitar album”. Hopefully this will encourage more people to go back and check out the band’s rockiest early albums as well as the woefully underrated guitarist’s solo endeavors.

(One person who doesn’t underestimate Manzanera is Pink Floyd’s David Gilmour, who continues to hire rocker Roxy to play guitar on his solo tours.)

Monday’s show kicked off, like Roxy Music’s self-titled debut album, with rowdy avant-garde number “Re-Make/Re-Model,” which served to announce to an unsuspecting listening world by 1972 that something very different – and very exciting – had just happened to the music scene.

From there, Roxy Music ventured into “Country Life” territory for a different, yet still satisfying take on “Out of the Blue,” with Manzanera’s guitar nicely filling out the famous solo at the end. by Eddie Jobson on transparent electric Plexiglas. violin.

The group has addressed seven of its eight studio albums. The one that didn’t make the cut, unfortunately, was one of his best – 1973’s ‘Stranded’, which powers such all-time winners as ‘Street Life’, ‘A Song for Europe’ and, above all, “Mother of Pearl”.

Still, it was hard to feel bad about not being played because we were so busy listening to beauties like “The Main Thing” and “While My Heart is Still Beating,” both from “Avalon.”

This makes sense, especially for a North American tour, given that “Avalon” is the band’s only album to reach platinum heights in the United States. Plus, the “Avalon” material – especially the title track and the romantic moon “To Turn You On” – resulted in some of the best moments of the night.

Still, I wouldn’t be surprised if Roxy decided to spread the set list a bit more evenly for shows in her native UK, where all of her albums were top 10 hits.

The first half of the show was slightly better than the second, but only because the big Manzanera rockers were mostly in the first.

“Ladytron”, the best guitar number from the first album, certainly lived up to expectations. “If There Is Something,” another offering from “Roxy Music” and perhaps the biggest song in the band’s entire catalog, featured even more Manzanera mojo than usual.

Yet the number that really brought the house down was “In Every Dream Home a Heartache” – the oddly compelling ode to a blow-up doll from the band’s second album, 1973’s “For Your Pleasure” – which culminated in a full gas, twist, turn lead Manzanera for the ages.

The second part of the show focused heavily on polished pop songs from the latest albums, stringing together six such numbers – ‘Tara’, ‘My Only Love’, ‘To Turn You On’, ‘Dance Away’, ‘More Than This” and “Avalon,” before dramatically changing the mood with the fast-paced disco-funk of “Love Is the Drug” from 1975’s “Siren.”

Roxy Music closed the show with two of its best rockers – “Editions of You” and “Do the Strand”, both from “For Your Pleasure” – as fans cheered the band on.

It was a triumphant return from one of the greatest bands in rock ‘n’ roll history. We can only hope they don’t make us wait another 21 years before visiting the Bay Area again.

St. Vincent opened the concert, delivering an enjoyable set that included favorites such as “Cheerleader” and “The Melting of the Sun.”

6, “While my heart is still beating”

9, “In Every Dream House, A Heartache”