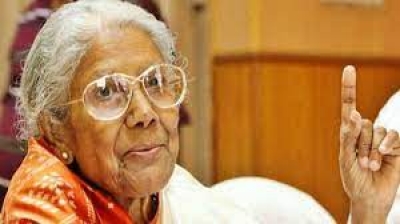 Kolkata: The Bengali music industry piper – Sandhya Mukherjee who spawned a cascade of never-before-seen musical melodies that became the lyrical language of millions of romantic hearts – has died in a city hospital at the age of 90 years leaving behind a legacy of unforgettable songs that will be remembered even after his death.

The last of the living legends of “Modern Bengali Songs” after Hemanta Mukherjee, Manna Dey, Shyamal Mitra – Mukherjee not only had a musical rainbow lyrical spectrum that cast a spell over the romantic dreams of Bengali audiences for more four decades, but she had a fearless and undeterred voice even until the end of her life when she could boldly refuse the central government’s ‘Padma Shri Award’ by saying ‘Mera dil nahi chahti/ Mein nahi lungi’ (My heart does not give consent. I won’t receive it).

A few days after turning down the prestigious award, she was admitted to SSKM Hospital for shortness of breath and a chest infection. She was later transferred to a private hospital where she tested positive for Covid and after a 19-day battle the legendary singer passed away. Mukherjee left singing in 2003 but she was respected and honored until the last day of her life.

Born on October 4, 1931 in Dhakuria in South Kolkata to railway employee Narendranath Mukherjee and Hemprabha Devi, Mukherjee, the youngest of six siblings, recorded her first song at the age of just 13. . She received her initial music training with Santosh Kuamr Basu, then honed her skills with AT Kanan and Chimoy Lahiri.

Although she sang many songs, she will always be remembered for her songs which she sang for Bengali films. It has sometimes been said that the box office hits of Uttam Kumar and Suchitra Sen were never complete without those of Hemanta Mukherjee and Sandhya Mukherjee. Songs like “Gane mor Indradhanu” or “Ei poth jodi na sesh hoi” or “Ke tumi Amare Dako” always tickle every Bengali heart.

Despite her musical career, Mukherjee never left her sense of freedom and self-worth. During the Bangladesh Liberation War, she joined the mass movement and raised funds for thousands of refugees. She established ‘Swadhin Bangla Betar Kendra’, a then radio station in Bangladesh with Bangladeshi musician Samar Das through which she recorded and transmitted patriotic songs that inspired thousands of Bangladeshi freedom fighters. After the release of Sheikh Mujibur Rahman, he sang the song “Bangabandhu Tumi Phire Ale” in the evening.

Her sense of patriotism and self-respect was evident even in her final days when she refused and declared, “My country loves me. I quit singing in 2003. That’s my pursuit. That’s what I’ve done all my life. I didn’t watch anything. I never thought of taking Padma Shri in my life. When people of my love love me, be it Padma Shri or whatever, I don’t need it. I want nothing more than the love of my compatriots”.