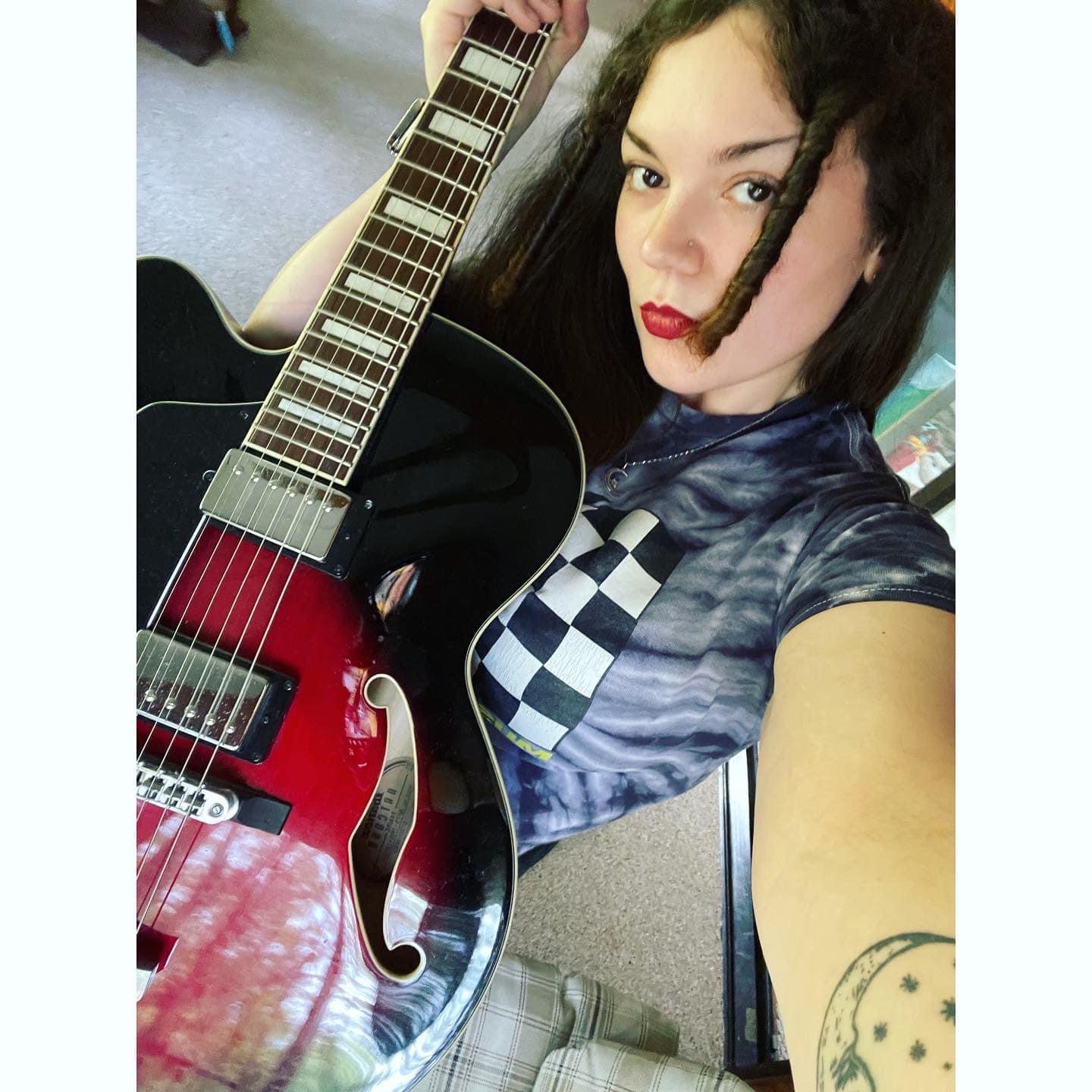 Jade pursues her dream of rocking like the Goo-Goo Dolls and Nirvana, after being inspired to play her family’s broken two-string guitar as a child.

“Like, I can’t even explain the moment it occurred to me that this is what I wanted to do,” Jade said.

Jade is completely self-taught, apart from a few group classes at school. She plays percussion, keyboards, bass and guitar, writes lyrics and sings all of her songs.

“So it’s been a while to come. But the last three years I’ve put a lot of work into it and got out there,” Jade said.

She recently purchased a t-shirt press to create her merchandise, and films, edits and produces all of her music videos, which she says is very important so people have to put visuals to her music.

Although she primarily categorizes her sound as pop-rock, she likes to experiment and float around almost every rock subgenre except country when it comes to her original tracks.

Jade is currently working on a five-song EP, as her currently released 11 songs are all individual songs and do not belong to any project. Having a physical project to give out at gigs and merchandise to go with it is a priority for Jade right now, to help her gain exposure.

Inspiration strikes Jade at quite often inopportune times, such as at the dentist, at the airport, at the grocery store, etc.

“I will sometimes have random lyrics in my head,” she said. “And I’m not always like, okay, I’ve got a whole song here. So I’ll just write one lyric and then move on with my life,” she said.

She has several notebooks that she has filled cover to cover with notes, lyrics, and a “vomit word” stream of consciousness from which she draws to write verses.

“There’s sometimes, as soon as it hits me, I’m like, I better write this now,” she said. “And even if the inspiration goes away, once I’m done writing it, I can come back to it later. It’s still there.”

Balancing her passion and her desire to take her career to the next level became a priority for Jade after her 25th birthday. She began to feel like she was running out of time to take her music career where she wanted to.

“I feel like after I turned 25 I started rushing everything so much more because I wish I was further away and I want to be somewhere before I turn 30,” Jade said. “And so that’s what I’m trying to navigate right now. Am I still young, there’s still time.”

Burnout is real, and Jade knows not to overwork herself, that succeeding in the music industry is a marathon, not a sprint.

“I try to prioritize rest whenever I have the time, which I know seems a bit at odds with being busy and having all these things to do,” said said Jade. “But it was really important. I learned because I overworked myself to the point where I couldn’t do anything for a few weeks.”

Jade realized after a few years of pouring all her energy into music, 24/7, that she was doing it wrong and needed to plan more long-term.

“Because ultimately it’s all about the passion itself, and not so much where you end up,” Jade said.

Jade’s music can be found on iTunes, Spotify and other streaming services as Allie Jade. His Instagram and TikTok, @auraofhorror, also has his music content. She also has a website bio.site/auraofhorror.

Jade also performs at Murphy’s Bar in Barryton, at 8 p.m. on Saturday, September 24.