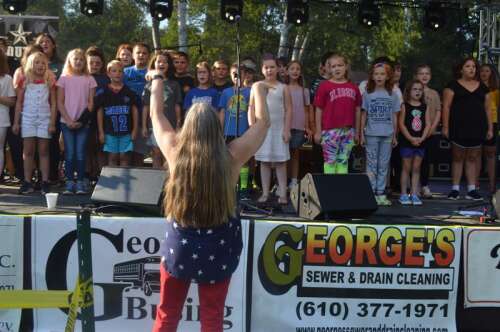 There aren’t too many things as comforting as taking a familiar stroll down memory lane.

That nostalgic feel — coupled with the assortment of food selections — got the 33rd annual Palmerton Community Festival off to a great start Friday night.

Students from the choirs of SS Palmer Primary School and Towamensing Primary School sang the national anthem under the direction of Carol Burkhardt on the main stage as part of the opening ceremony. They were joined by the Color Guard of the Palmerton United Veterans of Organization.

Uhnak said that just like those who remember the attack on Pearl Harbor or the assassination of President John F. Kennedy, everyone can remember where he was and what he was doing on 9/11.

They then honored those who lost their lives on 9/11 with a rifle salute.

Borough Mayor Don Herrmann thanked everyone who made this event possible.

Then, South Penn Dixie’s country flair followed hit after hit from the main stage. They were tracked by the Philadelphia Funk Authority.

Elsewhere, the walkways of the park buzzed with activity as customers made their rounds from vendor to vendor.

Chris and Brianna Dengler of Schnecksville were at the Aw Shucks booth with their one-year-old son, Elliot.

Renowned for its tasty roasted corn, the stand had long queues for the salty treat.

Across the park, 9-year-old Josh Slavy was playing several games of Skee-Ball.

Josh was accompanied by his aunt, Lynn Koehler.

“I bring it every year,” Koehler said. “To go on rides and play games.”

Nearby, Sara Moyer of Palmerton saw her daughter, Hanna Moyer, 4, get her face painted by Heather Ahner, owner of Intwined Your Salon in Palmerton.

Arner said she was thrilled with the crowds, excited for the beautiful weather, and grateful to everyone who supported the event so that all of her nonprofits could continue raising money for their causes.

Under the direction of Carol Burkhardt, students from the choirs of SS Palmer Elementary School and Towamensing Elementary School sing the national anthem on the main stage during the opening ceremony of the 33rd annual Palmerton Community Festival Friday. TERRY AHNER/TIMES NEWS

Along with their one-year-old son, Elliot, Brianna and Chris Dengler of Schnecksville prepare to leave the Aw Shucks booth. With them, Alyssa Lancsak from Slatington.

25 years ago, Shaun Cusson took a temporary job as a counselor at Hillcrest Education Centers. He is now President and CEO | Company