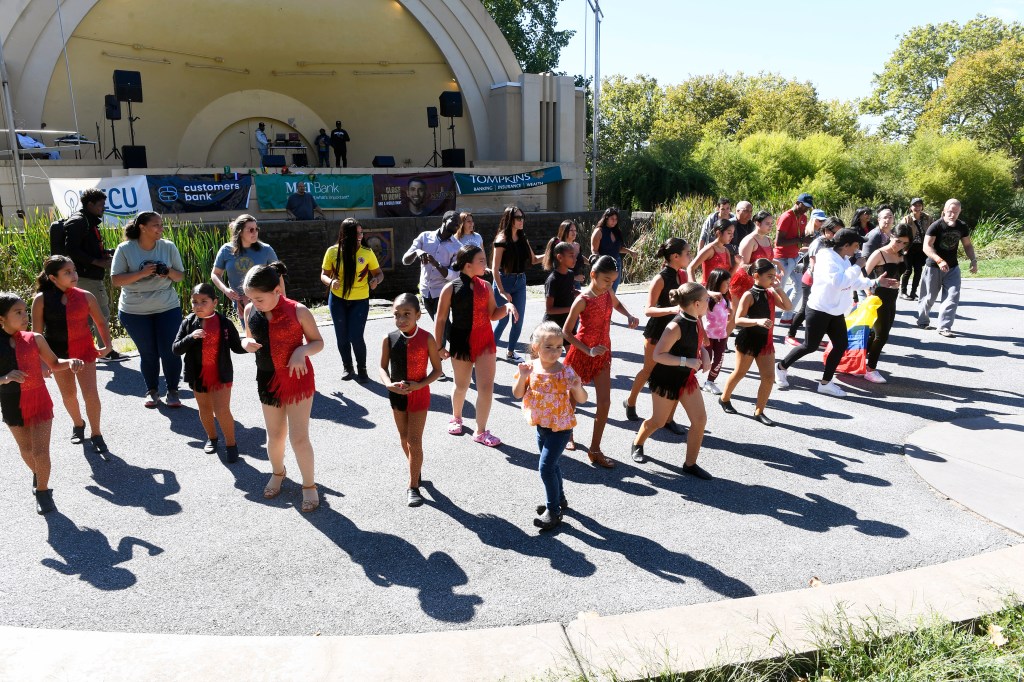 Walking through Reading City Park on Saturday was a bombardment for the senses.

There were reggae sounds blaring from the speakers. The sight of women wearing traditional Polish dresses. There was the aroma of fried plantains and Mexican street corn wafting through the air.

The Berks Cultural Diversity Festival was certainly a cacophony of cultural sounds, sights and smells.

Alex Civil, executive director of Bring the Change, said the goal of the festival is to celebrate Berks County’s diversity as a way to foster a stronger sense of place and create an environment where people can celebrate their heritage with pride.

“It’s a great event that brings people together and breaks down barriers,” he said. “If you look around you will see that although we all have our own traditions, we are much more alike than we are different.”

Civil organized the first festival as a way to highlight diversity in Berks after realizing how many different cultures are present in the county. It’s something he said he didn’t quite see when he moved here to study at Penn State Berks.

“After living in Brooklyn where there’s so much diversity, I was having a hard time finding my place here,” he said. “I was looking for other Haitians and I didn’t really see any. But over time, I realized how diverse we really were and wanted to celebrate that.

Civil said he wanted to create an event that showcased those differences with the goal of bringing people together. So he contacted heritage organizations and religious groups to see if they would be interested in spreading this message.

He was pleasantly surprised by the response.

And on Saturday, there were dozens of tents representing countries and religions around the world. Civil said that unlike most festivals, this one includes a learning element that ensures all attendees walk away with newly acquired information.

The event also featured games, shows, crafts and food. A lot of food.

Official partners for the event included the Dominican Association of Pennsylvania, Jewish Reading Federation/Berks, Centro Hispano, NAACP, Companions In Christ of Pennsylvania, and the LGBT Center of Greater Reading.

Stacey Taylor, president of the NAACP’s Reading Branch, has been a strong supporter of what Civil has been trying to accomplish since she was first approached about the concept of hosting a cultural festival.

She pointed out that depending on where people are from, they may listen to a certain genre of music or prefer to eat a distinct dish. But these differences can bring people together as long as they are willing to learn.

“We can appreciate what makes us different from each other and understand that we all bring something different to the table,” she said. “It’s something the festival is working towards.”

Patricia Vasquez feels the same. As president of the Dominican Association of Pennsylvania, she said she was excited to play a role in helping to make this a reality.

“We believe there is magic in diversity that leads to inclusion and equity,” she said. “Our goal is to make people feel like they belong and are part of the community in which they live. The more we are united, the stronger we become.

Vasquez said his organization focuses on community development by promoting social and economic inclusiveness. And part of that, she added, means having a strong cultural presence in communities across the state.

Ben Dalton said he liked what he saw.

The former Berks resident said he was visiting his hometown on Saturday when his parents suggested he go to the festival at City Park. Dalton lives in Washington but likes to see what happens when he’s back in the Reading area.

“It’s great,” he said. “I ate tasty food and enjoyed the music.”

Dalton said he was not at all surprised by the number of countries represented.

“Reading is a small town but incredibly diverse,” he said. “Because of that, I feel like I’m comfortable in so many different places. Growing up in a diverse place makes you more adaptable and flexible.

County Commissioner Michael Rivera knows this. Looking at the menu of Lio Colon’s Food Bus offerings, he explained that he was the product of two very different cultures.

His family moved to the United States when he was young. It was there that he attended school, graduated from college, and married his wife. But they decided to return to the mainland in 1996 to raise their own family.

“I think it’s very important to keep this legacy alive for the next generation,” he said. “Events like this have the ability to do that while bringing people together at the same time.”